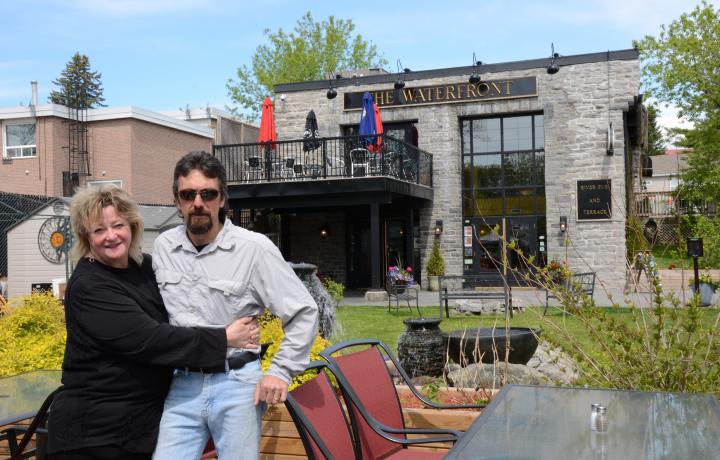 For a number of years a very old, derelict limestone building sat forlorn on the shore of the Napanee River on Water Street, just a few dozen metres from the heart of downtown.

As of the 2013 Canada Day weekend, the once dilapidated structure is now alive with activity as the home of Napanee’s newest destination spot, the Waterfront River Pub and Terrace.

The two level-pub and restaurant features classy but comfortable high-end décor that stylishly and effectively mixes the Victorian era charms of the original building with modern elegance. It also boasts a large licenced outdoor patio that extends right out to the river, as well as a second-level outdoor terrace.

The brainchild of Jane Adams-Roy and her husband Alain Roy, The Waterfront has been a labour of love that is more than 18 months in the making.

The couple, who have owned properties in Napanee for more than two decades, took a building that was literally falling apart and turned it into a place that not only offers locals and visitors alike a new place to meet, but is also a focus for the town’s desire to make the area fronting the Napanee river a true attraction.

“When we moved back here in 2011, we talked to a few people, including the owners and the mayor and decided to buy it. I don’t know that we knew at the time what we were really going to be doing with it. We knew we wanted to do something to bring some energy down to the waterfront. We wanted to create a place of connectedness for people,” said Adams-Roy, who was an organizational psychologist in the military and later a human resources professional in the private sector.

The Roys eventually decided a pub was going to be the primary use for the site, but they also added an ice cream shop and candy store, called The Waterfront Sweet Shoppe into the project.

“We wanted good pub food. We want scratch made stuff. We don’t want dressing squirted out of a bottle. We don’t want a dessert that you get out of a box, cut up and serve. We don’t want frozen hamburger patties. We are not fine dining, but we are good, solid, quality dining. That’s what everybody tells us they want and what is needed,” she explained, adding that it took a few months to find a chef who could deliver. Eventually an instructor at Loyalist College and former executive chef at the Loyalist Golf and Country Club, Levi Richard, was brought in to create the menu and run the kitchen.

But before that, there had to be a kitchen for him to work in. And that meant months and months of reconstruction efforts on the building.

“We got the building just in time. It’s one of the oldest buildings in Napanee. We have traced it back to the 1850s,” said Adams-Roy.

The roof had been degraded to the point where water had leaked in for years, seeping into the limestone walls, weakening their structure.

From the moment the Roys took ownership in November 2011 to February 2013, there were heavy duty jacks and braces being used to keep the building together. The entire infrastructure, from HVAC to plumbing and electrical work had to be done from scratch, as well as landscaping what would become the patio.

Through it all, Roy said she received tremendous support from staff at Greater Napanee Town Hall, as well as from Tracey Snow, enterprise facilitator for the L&A County Economic Development department.

“Tracey was awesome, especially at the beginning, because we had so many issues and so many questions. Even to know that she was there and that I could just pick up the phone and call her was incredible. And I had a zillion questions, especially with things like the business plan,” she said.

Future plans include possibly renting paddle boats, so visitors can paddle up and down the Napanee River and their leisure. There is also talk of possibly having live entertainment in the future.

In the interim, Roy is just happy to finally get The Waterfront River Pub and Terrace open, and bring vibrant activity back to what was a once forgotten piece of Napanee’s heritage.