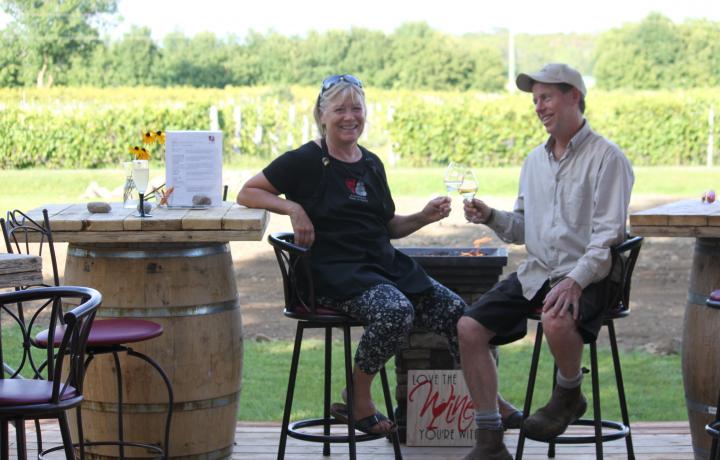 A combination of many serendipitous opportunities and the wisdom, know-how and willingness to take full advantage of those opportunities could be said to be the ‘secret’ of success for Norene Hyatt-Gervais, owner and winemaker of Morrisburg’s popular Stone Crop Acres Winery, which is celebrating its first anniversary this July.

A veterinarian by trade and training, she had always harboured a passion for wine and the dream of someday opening her own artisanal winery was always in the forefront of her life’s ambitions. Shortly after moving to the picturesque eastern Ontario community, a scientist in the U.S. had unlocked the genetic code for creating varieties of grapes that would be able to weather the cold climates of Canada.

It just so happened that the 70 acres of property Hyatt-Gervais and her husband Marc purchased 29 years ago were perfect for planting vines. For many years, Hyatt-Gervais, who essentially runs the facility after retiring as a veterinarian, educated herself on all aspects of winemaking and viticulture.

Many years later, in late 2016, at the same time as the last of the couple’s four kids were finishing university, a small neighbouring property containing a couple of structures became available. This meant that there was now a place to build a small-scale winery, as well as adding a tasting room and retail shop wherein the fruits [so to speak] of the Gervais’ labours could be sold. It opened July 15, 2017.

The winery and the wines created therein have been a hit, not only within the local region, but with visitors coming from throughout Ontario, Quebec, the northern U.S. and even tourists from abroad. They are not only won over by the flavour and overall quality of the wines, but by the enthusiasm and unmitigated passion Hyatt-Gervais has for her craft and her new vocation as a sommelier, wine maker and viticulturalist.

“I have loved wine all my life. I grew up with my family making wine. My husband and I moved to this rural property in hopes that we would be able to do something with the land. As soon as I found out there were grapes that could grow in this region, having a winery was the plan for sure,” said Norene Gervais.

One key to the early success of the winery has been the support from the local community; folks seem thrilled with the idea of having an artisanal winery that also happens to be a burgeoning tourist attraction, in their backyard.

“At our grand opening last summer, we had close to, if not just over 500 people and I would say 90 per cent were local. So, we had a wonderful opening weekend, a really good reception of our wines and lots of goodwill right away in the local community. I think much of that is because I have been the local community veterinarian for 25 years and I do know a lot of people. We also raised four kids in the community, so we’re well connected, and people knew that we had been growing grapes and for years were asking us when we were going to open a winery,” Hyatt-Gervais said, adding that the location of the facility so close to both Highway 31 and Highway 401 means more and more visitors are finding their way into the Stone Crop Acres Winery tasting room.

“We basically just had a sandwich board out on Highway 31, but you can see our winery when you are driving by, so we are literally a hop, skip and a jump off 31 just as you come off the 401 exit, so the location is superb for visitors and people who are just passing through. This year we will have signage [the little blue tourism signs] on the 401 so I think that the number of visitors will only increase. And we got really good comments from the people who did come in.”

Another key to the success of the winery has been the experience once on site. Hyatt-Gervais has worked hard to create an inviting, fun atmosphere that is anything but stuffy and pretentious.

“As a certified sommelier, I try to make it around to talk with everybody who comes in. I also have a very fun tasting protocol that I printed up and put on every table, so we can go through it together. We do all sorts of inelegant slurping and swishing and sniffing and people quickly realize that wine and wine tasting is not intimidating. If they don’t know anything about wine, I say who cares, do you know what you like, and can you smell and swish stuff around in your mouth? Of course they can,” she said.

“And so many people have said to me, ‘I have wine tasted all over the place: Niagara, California, Prince Edward County and I have never been taught this.’ I want it to be approachable and I want people to feel comfortable with the notion that wine is just a part of life. It’s not something to be snobby about. I have done a lot of wine tourism and I have come across places where I, even as a sommelier, will walk into a place and feel intimidated. I don’t think that’s the right way to do it. I think wine encompasses history and food culture and geography and normal culture, viticulture and agriculture and there are so many things involved in wine making that it’s just a part of life.”

It also helps that the wines themselves are of excellent quality – and that’s not just Hyatt-Gervais’ assessment, that’s the feedback she has gotten from her customers both local and from away.

“I think our wines were carefully crafted and I also think the blends are really nice. We give a selection of aromas and palates that people find really appealing. Right now, we have two single red varietals that come solely from our own vineyards and that is the Louise Swenson and the Sabrevois Nouveau. And then I have four white blends Frontenac Gris Vidal, Sauvignon Blanc, Frontenac Gris Riesling and Pinot Grigio. I have a beautiful rose that has three of our grapes in it and one Niagara grape,” she said, adding that as the business moves along, she will keep adding to the roster, based on customer demand. Last year, Stone Crop Acres Winery produced about 15,000 bottles in total and expects about the same number for this year if not more.

One of the biggest challenges for Stone Crop Acres Winery and its owner was the mountain of paperwork that needed to be filled out to obtain all the necessary permits and licences required to make, bottle and sell wine from her property.

“There is an absolutely enormous amount of paperwork that was involved. I have been an entrepreneur all my life because I ran my own vet business and there are a lot of legalities involved in being a veterinarian. But now I am dealing with a controlled substance in the province of Ontario, one that is very highly regulated,” she explained.

“You literally have to go one step at a time and check them off as it has to be done in the right order because one builds on the other. So that was a huge challenge for me because I am not the queen of loving paperwork. It is very hard to figure it all out and there were a couple of scary moments where we didn’t know if we were going to have it all done in time for our opening. The opening kept getting pushed back. But since I have gone through it I have helped some other people who are going through the process because its very daunting.”

But as any wine, beer or spirits maker knows, these are all necessary evils of the sort of business that they do, and it is worth it in the end, especially when you are already achieving the sort of acclaim and success that Gervais is experiencing with Stone Crop Acres. And going through the process successfully has also emboldened her as she has ambitious growth plans for not only the wines but for the facility itself, turning it into a true community hub.

The winery is already a season sponsor of the popular Upper Canada Playhouse and is also working with the nearby Upper Canada Creamery on cheese and frozen yogurt products. She is also already hosting concerts featuring local and out-of-town entertainers and wants that concert series to grow and continue to bring new people to the winery.

“I want to keep this a friendly informal place. But I would like to diversify what we can offer. I want it to be a centre where we can offer music, small and medium seized community or corporate events, but the winery will always friendly and artisanal. It’s a place where you can always come in and talk to the winemaker.”