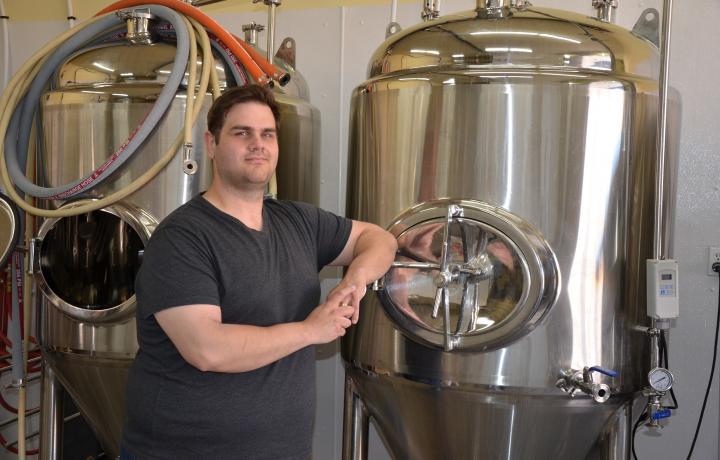 What started out as a passionate new hobby has turned into an adventurous – some might say intoxicating – new business enterprise for Napanee’s Geordan Saunders.

Taking his award-winning brewing knowledge and experience, and combining it with an already successful career as a marketing professional, Saunders opened the Napanee Beer Company over the Victoria Day long weekend to general acclaim.

While working in the marketing department of a major telecommunications giant in Toronto, Saunders and his wife wanted to buy a home and start a family. Seeking the friendliness and safety of a small-town lifestyle, they looked no further than Saunders hometown of Greater Napanee. Prior to making this big move, Saunders had already become adept as an amateur brew master, developing skills that set him apart.

“I really became immersed in the growing amateur brewing competition. And there was a period where I was the most awarded amateur home brewer in Canada. So beer recipe development is something I have been very interested in and I discovered that I kind of had a knack for it,” he said.

Using his marketing expertise and inside knowledge of his home market, Saunders honed in on three specific delicious recipes (since expanded to four with the addition of a new Belgian India pale ale) which The Napanee Beer Company offers to the public through its on-site retail operation at 450 Milligan Lane, and also through a growing network of high-end pubs and eateries. The three beers are the popular Deadline Premium Lager, Blacklist German Black and the Mayday Belgian Pale Ale.

“Deadline is kind of introductory brew. It’s a delicious beer that you don’t have to be a person who loves craft beer to appreciate, and it’s going to make it easier for you to step into the craft beer experience,” he explained.

The biggest challenge for Saunders was arranging for financing. Thankfully, the staff of the L&A County Economic Development Department was at the ready with resources and valuable connections.

“They helped me connect with mentors and advisors and people who really helped me develop what ended up being a pretty comprehensive business plan. They connected me with someone at a local bank who helped secure a great deal of financing. They also hooked me up with the folks at PELA CFDC who helped out with a significant grant,” he said.

With sales of domestic beer from large conglomerates on the wane, the Napanee Beer Company is riding the crest of a wave of popular and commercial support for hyper-local, independent, high-quality craft beers, and is undeniably poised for great success for years to come.

For more information, visit their page on Facebook or https://www.napaneebeer.ca.