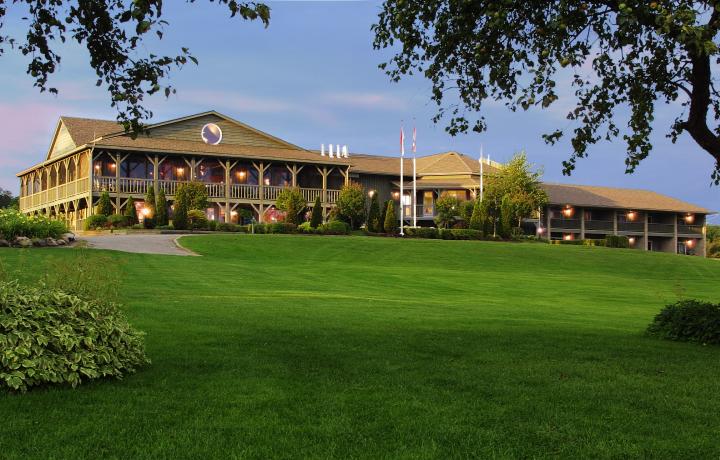 From Hockey Camp to Luxury Resort – The Continuing Evolution of Eganridge

Nestled in the lush, lake strewn landscape of the City of Kawartha Lakes, Eganridge Resort, Country Club and Spa is an upscale boutique resort that offers some of the finest dining experiences, wedding extravaganzas, corporate outings and accommodations in the region, and is also an example of a business that has adapted to changing times and tastes.

Formerly known as the Bee Hive Campground when it was opened in the 1950s by the Toronto Maple Leafs star and future Stanley Cup winner and Hall of Famer Allan Stanley, the modern facility now features all the amenities one would expect from the four-star accommodations facility.

“By the early 1980s it wasn’t used as a hockey camp any more but still had a number of cottages and the big log home which had about a dozen hotel rooms. In the late 1980s a gentleman named John Egan bought the place and he basically overhauled it. He converted what was the barn/club house into the main room, building on hotel rooms and adding a ballroom. He also got rid of many of the cottages to make it more of a hotel style setting than a cottage resort,” said Eganridge General Manager Jason Friedmann.

“And it’s been basically in the configuration it is now since the 1990s, although we have continued to upgrade the facilities amenities and decor. We can do weddings of up to 150 people. We have 23 rooms on site, meaning there is very personal service and between the rooms and out banqueting facilities we are perfect for corporate retreats or team-building exercises. Most of our staff will know the customers’ names or at least recognize their faces. We have a nine-hole golf course, a spa and two restaurants.”

Friedmann said about one third of the business are regular transient travellers, a little over a third are locals and the rest of the business comes from weddings and corporate clientele.

“Weddings are a big part of our business, because they involve so much of our facility all at the same time. One of the challenges we have encountered is that because we have a hotel as a key part of the facility, we want the people who are having weddings to also stay with us. And the local people don’t necessarily need to do that because we’re close by. So not that we are discouraging local weddings, but we have really tried to alter the wedding business model a bit to try and attract more people from outside the area, like from the Durham Region, Whitby, Oshawa – those sorts of places,” he said, adding that this past year Eganridge has generated some business by attending wedding shows in Ajax and Whitby as well as one in Peterborough.

“We are getting people who are within an hour or hour and a half away and they love the idea of coming up for a wedding weekend. These shows are sort of introducing us to people outside of the area, but we’re also, in our own way, introducing them to the Kawarthas.”

The warmer months, particularly the summer are the busiest, because of the weddings, golf and the increased use of the facility by companies for retreats or conferences, especially during the week. Friedmann said Eganridge is working to develop partnerships and working relationships with businesses and organizations in the nearby communities of Fenelon Falls and Bobcaygeon, although being, as he puts it “in the middle of the country” makes it harder to join forces with businesses in those communities, although they are making headway.

As well, Eganridge is looking for innovative ways to increase winter traffic.

“There’s not really a natural winter attraction here, although we do have cross country and snowshoe trails that we put in on the golf course. For the rest of the year, we do special events to try to bring people, both locals and maybe travellers and cottagers, to the resort.  We really have tried to come up with good reasons for people to come to us. Every Friday we do live music, and we have special events at different times to make Eganridge a destination.  And the more we do, the more people we seem to be getting out, so we’re going to keep trying different things and see what attracts people,” he said, adding that bringing people out to experience the dining facilities or golf will help attract more conference and corporate business as those folks go home and tell others about what Eganridge has to offer.

With an attractive, user-friendly and informative website, and a solid social media presence, word of mouth – both virtually and through interpersonal conversations, has been a boon for Eganridge.

“Word of mouth is good for all events and activities, not just weddings, although that is important because weddings enable us to have up to 150 people for dinner and usually fill most of our rooms. But it’s important that the couple who come up here from, say Newmarket, for a romantic one-night getaway on a Thursday has a good time, because they’re going to go home and tell their friends who are also potentially in the one-night romantic getaway market,” Friedmann said.

“And the same holds true for somebody who comes to play nine holes of golf. In this area we have to rely very much on repeat business so we make sure the experiences is as good as it can be for everyone. If they come in foursomes, we want to make sure that all four of those people had an incredible time the last time they were at Eganridge.”

Having a host of dining options, the chance to have a wonderful wedding experience, including charming accommodations and a doting staff, and continuing to add plush, pampering elements such as the on-site spa to meet the needs of a broad, discriminating demographic are reasons why Eganridge Resort, Country Club and Spa continues to attract an ever-widening group of clientele, exposing all of them to just a small segment of the natural charm, amenities and hospitality that the City of Kawartha Lakes has to offer.