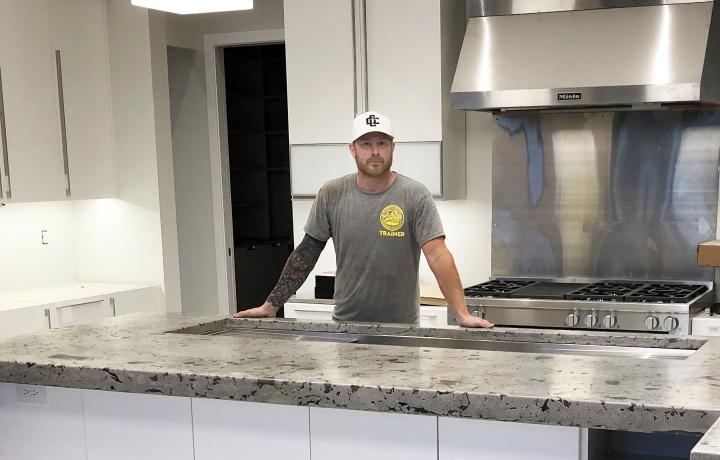 Creative Concrete Industries is trailblazer in this new trending craft

High-end concrete is making itself known indoors these days with outstanding, lasting and unforgettable results. One of Canada's most talented concrete designers is Charles (Chuck) Fournier, owner of Creative Concrete Industries, located in Elizabethtown-Kitley Township.

"I love what I do because I get to build something new and one-of-a-kind every day," says Chuck of his creations, many of which are on a grand scale. For example, he has created a triple island kitchen counter with three waterfalls along with many other functional pieces you have to see to believe, such as hearths, sinks and showers.

Two major commercial projects, identifiable by many for their uniqueness, are bar and table surfaces at 1000 Islands Brewing Company, in Brockville's downtown core, and the Rabbit Hole on Ottawa's Sparks Street.

"Every flat surface at the 1000 Islands Brewing Company is concrete I created," says Chuck, adding part of his love of the craft is welcoming a challenge.

"I've built things most others will not attempt - that's where I'm going with my company. Whatever you can imagine, I can build."

Once a foreman with a construction company, Chuck's career path changed after taking a basic concrete course in Toronto. "I fell in love with it immediately," he says. Soon he was travelling to Nashville to the highly-regarded Concrete Design School working closely with American craftsman Dusty Baker. Today, just a few years later, Chuck is a trainer at the school alongside Dusty.

"He's been my inspiration," says Chuck. Dusty is known for his sculpting, casting, carving and colouring of concrete.

Although Chuck has had specialized training, he still thought it would take a while to establish his business here in the area. Instead, it has taken off at a rapid pace since opening more than two years ago. "I thought I would be doing one kitchen a month. Now I'm doing jobs from Ottawa to Toronto, both residential and commercial.

"I feel I got into this niche craft at the right time. People love the work. It's different every time. Not one piece is ever the same," he says, adding he gets a lot of attention with images of his work he posts on social media. He also credits the support of his mom, Isabel Bottigoni, owner of 1000 Islands Miniature Golf and Driving Range, and brother Mark. The trio operate their businesses at the same location.

Learn more about Creative Concrete Industries and see completed works on their Instagram and Facebook pages or visit their website. Creative Concrete is located at 1850 County Road 2, just outside of Brockville.

In August, Chuck will be offering a hands-on concrete workshop Canadian style, including form-making, from simple to complex, to artisan.