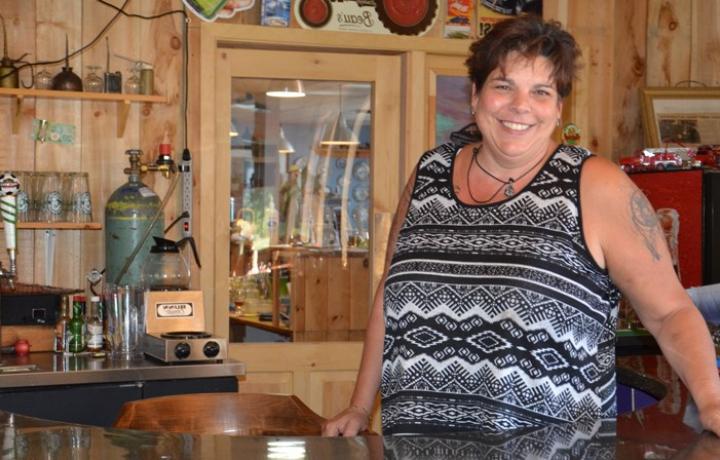 Home cooking, friendly service in the heart of Addington Highlands

From the age of 14, Melissa Evans dreamed of owning her own restaurant. Eight years ago, after many years of training and working her way through various jobs in the hospitality industry, her dream became a reality. She took over an existing restaurant in Northbrook, revamping it into a homespun family eatery now known as Addison’s.

Named for her son, who works in the restaurant, Addison’s has become a meeting place for locals, as well as a friendly respite for vacationers and day-trippers heading in all directions through the beautiful scenery of the Addington Highlands.

The menu features home-cooked meals that appeal to the most broad palate – individuals and families looking for tasty, ample portions of food that reminds them of family gatherings and special occasions.

“Everything is made from scratch. People seem to love our Rueben’s and corned beef, because we do all the cooking and preparation right on site. And pickerel seems to go like crazy off the menu, as do our hot turkey and hot beef sandwiches as well as our homemade burgers. On the weekends, our breakfasts are really popular as well. We’re open for all three meals a day,” Evans said, adding that in the busier summer months she employs about 15 people, dropping down to five or six in the fall and winter.

During the warmer months, 80 to 90 per cent of her business on a given day is comprised of out of towners.

With a wealth of experience both front of house and behind the scenes in running a restaurant, the biggest challenge Evans faced when opening Addison’s was getting the word out to both locals and visitors alike that Addison’s was open for business.

“Getting the customers in here and figuring out what they liked to eat was a big deal. So I did a lot of advertising and changed the menus based on talking to the people who came in, just trying to feel them out and see what they liked and what they would come back for. Having good, friendly service is important and it’s also important to keep things fresh. So I am constantly tweaking and changing the décor, and also I change the menus a couple of times a year,” she explained, adding that she also makes good use of her own website as well as various social media outlets such as Facebook, TripAdvisor and Yelp to bring in customers.

“And because we are right on Highway 41 [11893 Highway 41 to be precise], I have a big sign out front that I advertise with and another one attached to the building itself. I put flyers up in some of the other businesses in the area, like the bank and grocery store.”

And the hard work has paid off, as there is a steady stream of locals coming to eat, particularly for breakfast, and also regulars coming from surrounding communities such as Napanee, Kingston, Belleville, Madoc and Tweed.

“I seem to be pulling people in from everywhere, which is great. And I have discovered that I am sort of the halfway point between Peterborough and Ottawa, so people who want to meet with friends pick this as their halfway point, which is nice. I also have bikers [motorcycle clubs] coming in a few times a year when they’re doing their big runs. They even did an article about me in one of their publications.”

Evans grew up in the town of Innisfil, which is near Barrie, Ontario, back when it was more rural. She did her culinary training at Georgian College and began working right away, eventually earning a Gold Seal as a chef. After working in a restaurant in Cookstown and then the Barrie Golf and Country Club for many years she moved to Eastern Ontario, working at a catering company in Picton before opening Addison’s.

“I have been dreaming about doing this since I was 14 when I got my first summer job in a local restaurant. I felt like once I got that job and was in this industry, that was it; I knew I had found my home. I found that the whole process of working in a restaurant came easy and natural for me. And I loved it. Opening my own place was always my big goal and when I found this property was available I jumped at the chance,” she said.

“And I love this area. I am usually so busy that I don’t get a chance to really appreciate the nature and attractions around here, but I do like living here. My parents cottaged up here forever, so it’s not like I am new to the area. I was very happy to see that this restaurant was located in an area that I already knew and already enjoyed coming to. The pace is more laid back and the people are so friendly. It’s great.”