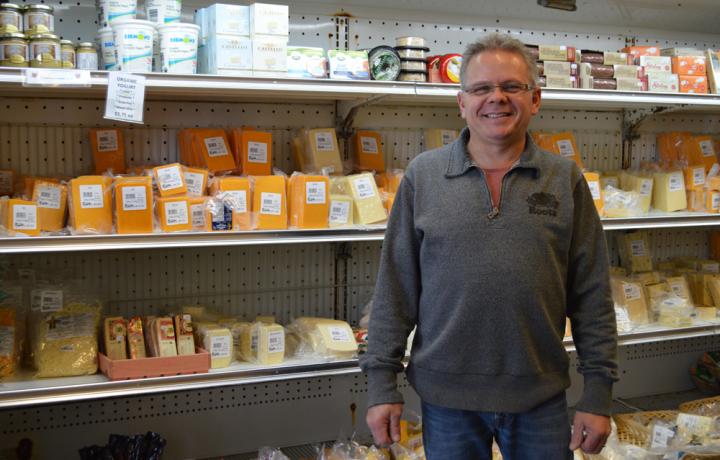 With many families showing greater interest in where their food comes from, how it’s produced and what ingredients are used, the simple, homespun, all-natural cheese making techniques that the folks at Wilton Cheese have been using for decades are as important as they have ever been.

It’s that constant and consistent dedication to quality, to natural methods and ingredients that has made the company a staple on local dinner tables, lunch boxes, retailers and restaurants for years, and has also made the factory itself a kind of food tourism destination for three or four generations of families.

“We get people from the United States, from out west and down east. A lot of times it’s people who have moved out of the area and when they come back, stop in, or its people from the area who come out for a nice country drive on a Sunday with their families. It’s really become a popular place to travel. And it’s not just the older people, I have talked to young people who say their grandparents used to bring them here or their mom and dad, and now they’re coming with their kids,” said Dave Larkin, who has worked at the Wilton Cheese Factory since 1985 and has been its general manager since 2008.

Around the time that Canada was being created through Confederation in 1867, a group of farmers in the area created a co-operative enterprise that became the Wilton Cheese Factory. When the co-operative was looking to sell in the 1970s, long-time cheese distributor A.M. Jensen Ltd. out of Simcoe, Ontario, purchased the factory, but left the business and the brand as it was.

“All Jensen really did was package and distribute cheese but they had always bought their product from us, so in 1978 they bought the factory from the co-operative. And it was a condition of the sale that the name remained the same. Jensen has always been really good about keeping things the way they have always been, because they recognize the value of the brand and the way in which the cheese is made here. Even now, we’re on the third generation of Jensens that own the factory: first it was the grandfather, then the father and now the son. And he still wants it to be kept the way it’s always been,” Larkin explained, adding that Wilton’s reputation for quality and natural goodness is firmly established in the region and beyond.

“We still do things the way they were done 50 years ago. We use 100 per cent whole milk – we don’t skim any fat off our cheese. And there are no modified milk ingredients, it’s all natural. So our reputation is for quality and taste because it’s certainly not because of price. It’s not the cheapest way to do cheese by far. With the bigger producers, they skim the fat off and they do put in modified milk ingredients which makes for a more profitable product, but it’s not as high a quality.”

Wilton Cheese is best known for its cheddar varieties and cheddar curds. As far as cheddar goes, Wilton makes extra mild, mild, medium, old, and extra old. As well, they make specialty Brick cheeses with hot peppers, onion and garlic, or olives, as well as Colby and Marble cheese. A number of top restaurants and eateries in the Belleville, Kingston and L&A County areas use Wilton Cheese in their recipes, while approximately 100 retailers – from large grocery stores to mom and pop convenience stores, carry their products.

“We sell about 25,000 kilograms of product a month, although it picks up during the holiday season because we have so many people wanting our special gift boxes. We sell thousands of pounds of curd a week. And it’s for more than just poutine. People like it for the flavour, and because it’s a ready-to-eat product that you can just open up and enjoy,” Larkin said.

Wilton Cheese employs 25 people, 15 of them full time and almost all of them from the rural area around the village of Wilton itself.

“It’s such a relaxing pace of life here, so much better than the hustle and bustle of the bigger cities. And I think living in this area, people know of the reputation of Wilton Cheese and they take real pride in working here. It’s hard work, but the reward is knowing that you are making something that people have enjoyed for so many years and which has such a great name for quality and taste. We are all proud to work here because we know we make a good product,” Larkin said.

The factory is located at 287 Simmons Road, in Wilton. For more information, visit www.wiltoncheese.ca

Photo and Story courtesy of the County of Lennox and Addington