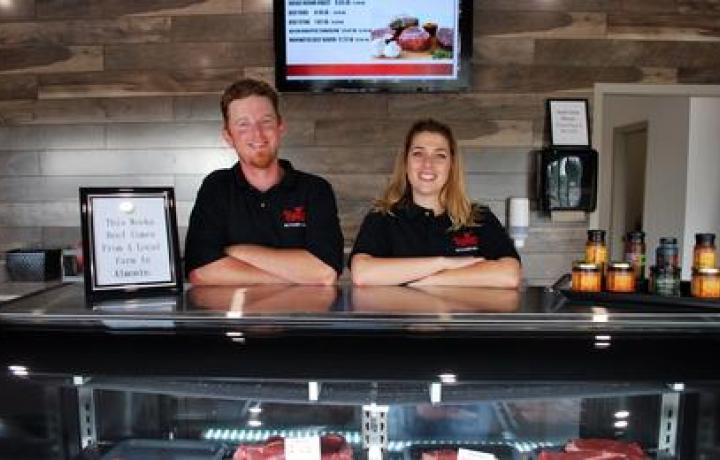 They only just held their grand opening, and Dan and Angie Hoystead have been delighted with the response. “We hit our target for sales on the first day, and we’ve tripled our sales in three days, before we’ve even had our grand opening!,” said Angie.

“We decided to open this business because we knew there was a need,” said Angie.

Dan had been working in the meat industry for a number of years and already had a strong rapport with many of the area’s meat producers. “I’ve worked in a lot of different food service environments and the skills I’ve gained have provided me with the opportunity to operate a business and provide a necessary service to the community I grew up in,” said Dan. With a strong business plan, a list of clients and building plans, the couple set off in search of seed funding. “We approached Valley Heartland, and they were great, they put us in touch with the right people and we got an EODP [Eastern Ontario Economic Development] grant, and they’ve been incredibly supportive,” said Angie. Taking over what had once been an auto-parts building the couple gutted it, and built a retail shop at the front, and a meat processing plant at the back. “We put in walk in coolers and freezers and a processing room.  We built two clean rooms, one for processing inspected meats and one for wild game,” said Angie.

The thrust of the business is to provide a place where local producers can have their animals custom butchered and packaged to their specific requirements, and to have a retail outlet that provides customers with locally raised meats, that can also be custom cut to the buyers particular needs. “With Valley Custom Cutting you have the opportunity to know where your meat came from and how it was raised, so that’s a feature that makes them very different,” said Dave Smith, owner of Ashton Glen Farm, an organic, environmentally sustainable grass fed beef and pastured pork farm.  Smith is one of Dan’s best customers, and he’s delighted with the service he gets from Valley Custom Cutting. “They also have an excellent facility- I’ve taken a tour – it’s all state of the art, brand new and it’s digital,” said Smith.

That last feature, is important according to Smiths, because it means he can simply go online and send his cutting instructions without having to drive an hour from his farm. Right now Valley Custom is picking up producers’ slaughtered animals from the two closest abattoirs.  They will pick up and transport carcasses from Wallace Beef out of Kingston and from Mr. Beef out of Pakenham, and are hoping to add the pork abattoir Reiches and Lynches soon.

According to the Hoysteads they want their entire business from processing to retail to be known for one thing – honesty. “The entire point of this business is to provide an honest and clean service to the community,” concludes Dan.

Story by By Howaida Sorour-Roberts, Hometown News, courtesy of the Town of Smiths Falls