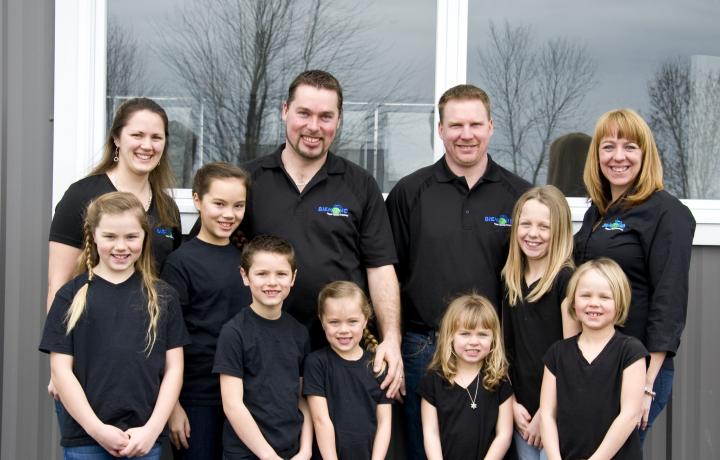 For 30 years, Pieter and Maria Biemond ran a successful dairy farm in the lovely, lush farmland near Iroquois, Ontario. For most of that time the farm has also been fully organic, serving an increasing demand for organic milk throughout Eastern Ontario. In that sense, the Biemonds were ahead of the curve, meaning the farm was busy and prospering.

At times during their tenure running the farm, the elder Biemonds had pondered the notion of making cheese but didn’t have the facility and were at a stage in their lives, after many years of hard work, where they didn’t want to dive into this new, labour intensive venture. When the next generation took over the family farm in 2011, sons Rudi and Josh (two of seven kids altogether) and their respective spouses Jennifer and Ellen, realized that a second revenue stream was needed and thought perhaps cheese was indeed the way to go.

But after some careful thought and research, they chose to go with yogurt as that secondary product. With construction of the facility happening throughout 2014 and 2015, Upper Canada Creamery came into operation with a grand opening in August of 2015. The new enterprise is in the business of producing, marketing and selling a family-recipe yogurt to distributors, retailers and restaurants throughout their part of Eastern Ontario – and rapidly expanding in the region.

“My brother Josh and I are running it now, so there are three families being supported by the farm, including my parents. We needed to increase revenues so we initially thought of making cheese. My parents always had the dream of making cheese but they deemed that they were too old to start a new venture, so they let it go,” Rudi Biemond said.

“When we took over, we decided to re-look at the idea and then we decided to do yogurt instead of cheese because it’s a lot easier to get into the industry and there’s less waste. Cheese is a good idea but you have to focus on specialty cheese and it’s a very competitive market. Plus, you have to have 60 days of storage before you’re allowed to sell it. So it’s pretty tough to wait that long. We crunched the numbers and cheese wouldn’t have been profitable enough, quick enough. But we all got our licences, so down the road we can add other SKUs, like maybe cheese,” added Jennifer.

Another reason they chose yogurt was that it was something they had already been making for their own family use for many years.

“We’ve been making it for 30 years at home for ourselves, so we didn’t have as much to learn as we would have for cheese. And we also have a family mentor – Margaret Peters-Morris from Glengarry Fine Cheese. She has been helping Rudi’s mother for years and she started mentoring us. She actually cut the ribbon for our grand opening ceremony. She helped us with how to design the plant and helped us get cultures too [to make the yogurt].”

The biggest challenge has been in getting the word out about the farm and the yogurt, but even after six months, mostly through the marketing efforts of Jennifer, Upper Canada Creamery is making serious inroads with retailers and distributors throughout eastern Ontario and beyond.

“We’ve sort of divided the labour here between the four of us. I am in charge of sales, marketing and media. I found an amazing website designer to create a good website, which we realize is critical to helping get some attention for the business and to interact with our customers. I also do the social media, including Facebook, Instagram and Twitter, which is also important. Other than that, I cold call stores and distributors. Right now we have three main distributors and are in about 50 stores,” Jennifer explained, adding that the retail outlets selling their yogurt range from Kingston to Cornwall and up to Ottawa.

One way they are working to raise the profile of the facility is by making the farm itself into a ‘destination’ attraction, where visitors can see the entire yogurt-making operation from start to finish.

“We definitely want to increase our sales, but we also want the creamery to become a local landmark. We want people to start coming here and visiting like they do for a micro-brewery. We are also hoping to start getting school tours going through, family tours – that type of stuff,” she explained.

“We can educate visitors on just how natural it is to make yogurt and how we don’t have to over-process our food. We want to be as real and natural when it comes the land, to the milk and then to the actual yogurt.”

To that end, in mid-March of 2016, the Biemonds hosted what they hope to be the first of many Yogurt Fest events, which featured games, tours, samples and other vendors.

The long-term goal is to continue to grow steadily, to the point where they have maxed out the capacity of the facility as well as the amount of milk being produced on the farm.

“Ultimately, we would like 100 per cent of our milk to be produced and shipped out and bought by clients in the area – and that’s a lot of yogurt, about 350,000 litres a year. So we’re expanding slowly, but also talking to some of the bigger companies too,” said Jennifer.