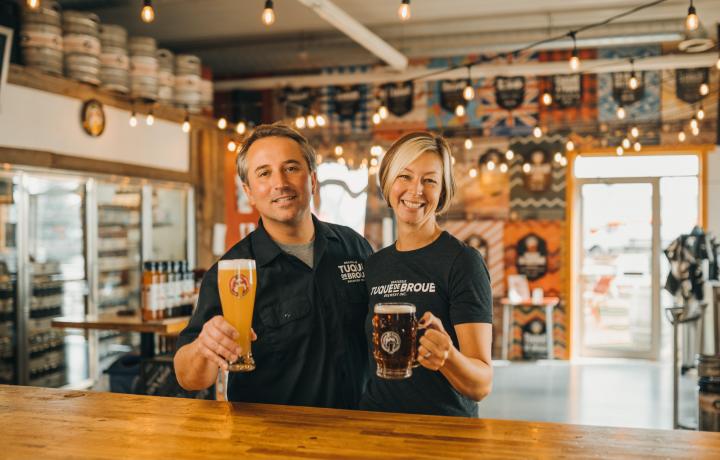 A small-town brewery in Eastern Ontario has combined a devotion to community with a responsive, adaptable business strategy to achieve success and make its mark within the highly competitive craft beer industry.

Based for more than eight years in the picturesque community of Embrun, Tuque de Broue is the passion project of former wine industry veteran Nicolas Malboeuf, who, alongside wife Margo, embarked on this venture to satiate a desire to own their own business, while pursuing their love for craft beers.

Initially using the expertise of his colleagues at Ottawa-based Kichessippi Beer Co. to launch his first beers, including the flagship Tuque Doree Canadian Pale Ale, Malboeuf’s recipe development process evolved first into hiring outside brewers to produce more additions to the beer menu. More recently, using all this collaborative, hands-on experience, he has come to trust his own judgement of taste and the desires of his clientele.

“That first one was based on a vision I had of creating a beer based on a Stiegl beer out of Austria that I loved. I wanted an easy drinking beer for the masses, so we developed the first recipe with Kichessippi and over time it evolved to what it is now. When we moved into our building eight years ago, with our own equipment I changed it a little to what it is now, where the slight sweetness of the malt comes through, but yet retains a very clean and filtered tone,” Malboeuf explained, as he talked about his key beer recipes.

“The Doree pale ale is our flagship and always will be. Then there is the [Gougounes] Red Ale, which I think is exceptional. There are not many red ales in the craft beer market that are filtered this clean and so consistent. I think the recipe is spot on. We also started to make lagers about two years ago and that has now become our third biggest beer, in terms of volume produced and sold.”

One of the more interesting and innovative ways Tuque de Broue markets its beers is through partnerships with local businesses in the Embrun area. For example, the aforementioned lager is branded Tessier for the Tessier Real Estate team. A honey brown variety is branded with the name and logo of Bertrand Plumbing, while the light sparkling amber is branded with the SSC cleaning name.

“For some of the names we used words that were relatively easy to say and remember in both French and English, which retain that ‘cute’ factor. Lately it’s been based on those collaborations with businesses in the community that want to have a different marketing approach for their own brand,” he said.

Collaboration and involvement with local business and the broader Embrun community has been a guiding philosophy for Malboeuf since Tuque de Broue opened its doors. It is not only borne from a sincere desire to be a community leader and good corporate citizen, but it makes sense from a business point of view to be seen as a hub for the community.

This is why, again from the outset, Malboeuf has made the brewery a place for folks to gather. For example, there are numerous holiday parties taking place on an almost nightly basis in the brewery. In the warmer months, there is a food truck outside to allow patrons to dine where they drink, usually accompanied by live music and a vibrant, fun atmosphere. Many charity events and fundraisers are hosted on site, while the brewery also sponsors other events and organizations.

Another mutually beneficial partnership is with the local arts community. The walls of the brewery are bedecked with paintings and other examples of visual art by local artists, which is curated by the Conseil des arts Prescott Russell Arts Council (CAPRAC) artists and artisans, with new galleries being staged seasonally.

Paying attention to the bottom line and understanding the ever-changing nature of the beer business, Malboeuf has never been afraid to make changes, when change is necessary, including how and where his products are sold.

“We do have our beers going into restaurants and bars, but that’s a very tough, dog eat dog business. So that’s why we are focusing more on having people come to the brewery. We still sell it at some grocery stores and local LCBO and Beer Stores, but we have shifted the percentage of what goes where. The cost of putting it in the LCBO, say in Kanata, makes our margins so small. Plus when people come to the brewery I can also sell merchandise like hats and t-shirts, as well as making a better margin on the beer sales,” he said.

On this same theme, Malboeuf said that even before the COVID pandemic, the business model for the brewery was always in flux, as he streamlined the business approach, honing it in on the local market as opposed to his previously more scattergun tactic.

“My secret is that I stopped trying to be bigger, and trying to be everywhere and to focus on being where it counts, which is close to home. At one point we were shipping to places like Collingwood and London and I realized at the end of the day it was costing so much more to do that for such a small return. I realized that we were selling to the wrong market. I decided to really concentrate on selling to within a 45 minute drive of the brewery, so people who get our beer in a grocery store or pub can come and actually visit the brewery more conveniently. They actually care about the brand and they can take pride in having a local brewery.”

COVID was also a blessing in disguise in that Malboeuf and his wife Margo realized that the administrative side of their operation could be streamlined. With the narrowing of their market aspirations, there was no need to have, for example, a dedicated restaurant/bar sales rep. Prior to the pandemic, Tuque de Broue had a staff of a dozen people. Now they have five or six, including part timers. Fortunately, when the shift to a leaner operation happened, there was open communication with employees, all of whom found other work.

Taking a ‘one step at a time’ approach to building the business, Malboeuf said the next objectives for the brewery include having the ability to have food year-round, and in house. This could feature the purchase of a panini press to make gourmet sandwiches, with the addition of other offerings, so that visitors can enjoy a bite to eat while tasting the various brews on tap.

“A lot of people have been asking how did we pivot? And I said, ‘we don’t pivot. It’s called just another day at work!’ Right from the get-go we have been changing and adapting and doing what we need to do to make the business better, so I kind of laugh when people ask how we pivot. Pivoting is what we do on the average Monday,” Malboeuf said with a chuckle.