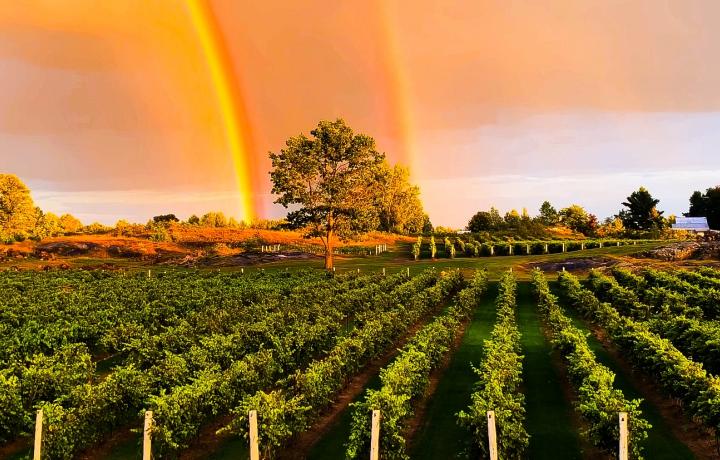 In many ways, it is the story of the ‘little winery that could.’ In the face of derision from competitors, going against the prevailing wisdom and tightly held logic that a winery located north of Highway 401 in rural Hastings County was a folly, Sandor Johnson has proved the naysayers wrong – emphatically.

The creator, developer and intrepid spirit behind Potter Settlement Artisan Winery, Johnson has built a profitable and growing business based on the philosophy that quality trumps all other considerations. From the initial idea of planting a revolutionary new strain of grape, the hale and hardy Marquette, to the building of the winery itself on the farmland occupied by generations of his family near Tweed, his desire has always been to make wine of superior character; one that would wow both the expert cognoscenti of the international wine world, as well as please the palates of those closer to home seeking an exceptional and elevated taste experience many cuts above the more mass produced brands on the market.

“In a way, it’s kind of a conundrum. If you stay small and humble and make small batches of very high-quality wines, of course you’ll run out of product quickly. But you’ll maintain the integrity and quality of the product. The big companies think the opposite way and that’s because they’re machine harvesting and using chemicals and all that sort of stuff, and it’s just not the same. And they’re very very successful, it’s just a very different approach. It’s like working hard and using the best ingredients to make a cake for your family of five to savour and enjoy the experience or buying a Twinkie at a gas station. It’s fine and it tastes fine, but it’s just different from what we want to do,” Johnson explained.

The proof of this vision and the wisdom of pouring all his resources, energy and time into learning the trade, sourcing the very best raw materials and processing techniques for his wines over the last 15 or so years has paid massive dividends in terms of both critical acclaim and a booming bottom line.

The 2017 Potter Settlement Marquette previously earned gold at both the National Wine Awards of Canada and the San Francisco International Wine Competition in 2018. As recent as June of 2021, that same vintage brought home the gold from the 2021 Challenge International du Vin in Bordeaux, France, one of the most prestigious international wine competitions. From the same competition, Potter Settlement’s Pinot Noir also earned gold, while their Cabernet Franc earned a silver.

“For us it’s really something, really a validation for everything we’ve worked for. To take an unknown grape, that was first invented in 2006, and first planted in 2007 and not even recognized by the VQAO until 2019 from ground zero to arguably the most prestigious gold medal on the planet is unheard of,” he said, adding that as soon as the victories hit the press and the internet, the orders came rolling in.

“What got us through COVID was winning those international medals, because when you win at that level, you go on a list of all these collectors who want the best stuff in the world in their cellars. So, we were shipping cases all winter long {because of the previous notoriety]. Of course, when we won in Bordeaux, within 10 minutes we had at least 100 orders. One order came from Australia, and it cost more to ship the wine than the actual wine, but he said, ‘go ahead and ship it.’”

Besides the passion, drive and wine making expertise Johnson brings to the table, as well as marketing and promotional savvy learned from his days as a top model and actor, two of the big keys to success for Potter Settlement are the truly incredibly rich minerality of the soil of Hastings County, and the hutzpah to be a true pioneer by successfully planting and subsequently growing and harvesting the experimental Marquette grapes for the first time ever in Canada, in 2007.

Both demonstrate and epitomize what it means to be an entrepreneur – making the most of the gifts given to you by the natural environment and having the courage of one’s convictions to take calculated risks to ensure the uniqueness and ultimately solitary excellence of the product you produce.

“We have a few secrets that really aren’t so secret and one of them is that we are in the heart of the mineral capital of Canada, which really makes us one of the mineral capitals of the world, and that really goes a long way in the world of wines. Minerality is something that wineries tell you about when you walk through their doors, it doesn’t matter where you go. As a comparison, in Prince Edward County they have 13 minerals compared to 242 in Hastings,” said Johnson.

“People are interested in our story, they are interested in the innovation [in collaboration with university researchers in the United States] to go from something that was previously unheard of to a grape that is disease resistant, so you don’t have to spray fungicide or poisons on them like every other grape. It’s also cold resistant down to -30 C, and here it is winning all this international acclaim. We’re really very grateful.”

The price points for each bottle are obviously higher than the average wine at the LCBO, but it is still eminently affordable at anywhere from $25 to $100 a bottle for the handful of selections of white, red and rose. So that’s essentially where Potter Settlement makes its money. Johnson is making wine that he himself loves and enjoys, and thus his customer base is comprised of folks from all walks of life who also enjoy a unique and superlative sensory experience as they indulge their passion for wine.

Johnson said he is mulling over planting more Marquette to meet the demand, as long as it does not impact the process that leads to its exceptionality. He also said he is working on new products to add to the roster of in-demand brands that already comprise the Potter Settlement repertoire.