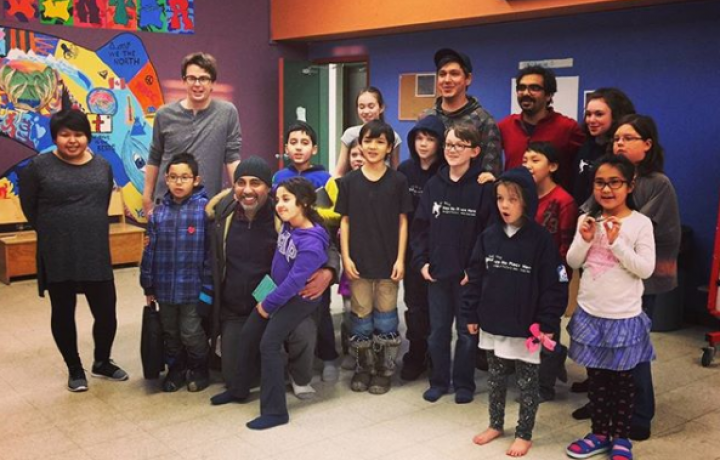 Living and working in the community of Pangnirtung in the Nunavut territory in northern Canada, Ryan Oliver realized one of the significant educational deficits in many Indigenous communities was a lack of computer training, especially in the crucial areas of coding, software and game development. Understanding the importance these skills would be in improving the economic and community development opportunities for those communities, and especially for enhancing educational opportunities for their young people, Oliver rounded up several tech buddies and began a humble little non-profit enterprise called Pinnguaq.

Now headquartered in Lindsay, Ontario, Oliver’s hometown and where he returned to after a decade in the north, Pinnguaq has staff working out of Iqaluit, the capital of the Nunavut Territory, in Pangnirtung, while the firm’s programmers and developers work in Burnaby B.C. the high-tech hub of Canada.

Its mission is to use computer games as teaching tools in the Indigenous languages themselves and they are created or curated to seamlessly integrate into the culture of the Indigenous communities they hope to service.

“During my time there I worked in economic development, specifically as the senior advisor for cultural industries. My job was essentially to build the cultural industries in Nunavut, such as film, music, visual arts – everything you could call a cultural industry. I started to realize that as my kids grew up in Pangnirtung and as I got more involved in the community I knew that computer science was just not an option in Nunavut. I did some research and found that it was not being offered at any school anywhere,” said Oliver.

“What skills I had, revolved around cultural industries as well as business development. So that, combined with the high-tech computer skills of some of my peers, were the foundation for this company. Their tech talent and my ability to open doors and create alliances across the territory and across different provinces is where it started. It was a way of evening the playing field for those kids and their communities. It really was about putting things in place that I had opportunities for, so that my kids and everyone else’s kids would have those same opportunities.”

Pinnguaq has created language revitalization mobile apps as well as programs to help students learn computer skills through creating games, in their own language.

The focus for much of Pinnguaq’s team is expanding the reach of the company’s anchor program, called Te(a)ch. According to the website, “Te(a)ch is a made-in-Nunavut curriculum and learning series for Northerners. The program focuses on computer science and game development, offering a full suite of in-community and online learning.”

As it is a non-profit, Pinnguaq’s resources have to be delegated to programs and services where it can access government funding. This means being able to deftly pivot from one project to another. Maintaining effectiveness and efficiency, it has become one of Pinnguaq’s most admirable and marketable traits.

“Te(a)ch is definitely the anchor at this time strictly from a financial basis. For a non-profit it’s about government contracts and that type of thing. It’s about pitching ideas that we feel passionate about. We have been around for five years now and we do have a bit of a reputation that is trusted. Our biggest revenue stream is from Te(a)ch. The federal government created a program called CanCode and we were awarded $1.7 million about five months ago,” Oliver explained.

“But the nature of a non-profit is that we are thinking beyond that now. We have a whole pile of staff implementing and expanding the Te(a)ch program while a few of us are now thinking, okay come summer 2019 when that funding has ended what are we doing, as well as continuing to build off the successes that we had off of Te(a)ch and the successes we’ve had with everything else.

“We are fortunate with this large amount of funding to be able to build up capacity with the Te(a)ch program quickly. The other thing about the nature of our business is that we are pretty flexible. Te(a)ch is the priority right now but next year it could be an app that we’re developing or something else. That’s cool, because we’re opening every door that we can right now.”

One of the biggest challenges facing Pinnguaq is ensuring that they are offering what the Indigenous communities actually want and need and not what they think those communities want and need, which has been the bane of many so-called government-imposed community and economic development strategies for First Nations communities for decades.

“We have to avoid getting complacent and patting ourselves on the back too much. We are constantly questioning whether we are doing this the right way and making sure we don’t repeat 200 years of colonial history with computers now. It’s an economic development and social develop strategy and cultural retention project that is good for the whole country, as well as Nunavut and the individual communities. But it has to be done the right way,” Oliver said.

“When white people tried stuff in Nunavut it would last for six months and then they would go away. So, our job was to prove our programs and products won’t suck and that this is worthwhile for all parties. It was about hitting the ground running and starting educational programs right away and demonstrating that we could deliver the products and we could improve capacity.”

One of the ways they did this in the very early stages of the company was to encourage existing game developers to simply create Inuktitut translations for some of the games they already had on the market.

“We reached out to friends in the industry and asked if they wanted to take their games and do the translations so that at least we could be getting the high-quality games into the Indigenous languages to kind of bridge that gap. The first thing we did was a game called Osmos which won Game of the Year in 2010 on iPad. We knew the developers and they let us translate it and we did that as a territory-wide consultation of the translation and it really helped with the buy in. So here we have one of the best games ever made and it’s now in Inuktitut, which was a huge step. It helped us to visualize further steps not only for us but for the people in the communities we’re wanting to serve.”

While the primary impetus for Pinnguaq is Indigenous language communities in the north, Oliver said the company is currently looking to expand into other First Nations territories in other parts of Canada, including Ontario. As well, they are looking at adapting their programs and products for other communities.

“The idea at the end of the day, even beyond First Nations, is that we think we have developed a methodology and a way of working with underserved communities, regardless of what type of community it is, better than anyone else. I think it’s one of our key strengths. It could be adapted to immigrant communities and I also have some background working with folks with disabilities and we’re just starting to explore how we can create better tech for people with physical challenges. Ultimately, the appeal is who is not being served right now, and how can we do better for them,” he said.