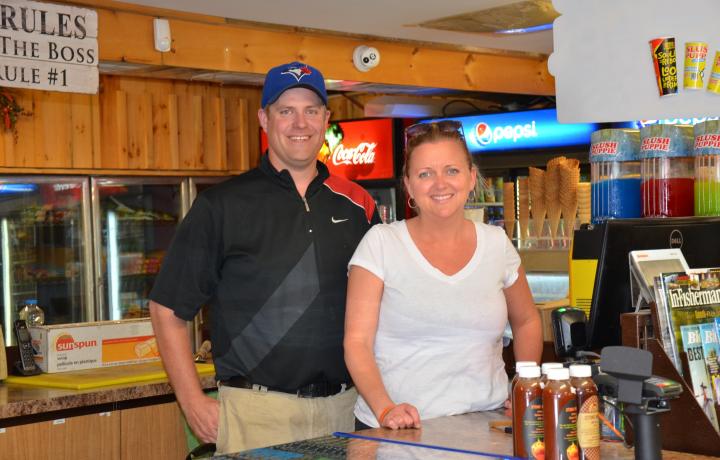 McCormick’s Country Store’s ability to adapt is key to its continued success in L&A County.

Lindsay Noyes and her brother Justin Martin have spent a significant portion of their lives within the inviting and homey confines of McCormick’s Country Store in Camden East.

As teenagers they worked in the store, which has been both an important business and social hub of that part of Stone Mills Township and Lennox & Addington County for decades.

After managing the store for a couple of years under its previous owners, Mike and Amy Martin, Noyes and her brother bought the venerable entrepreneurial institution in 2003 and have been operating it ever since.

“We just fell in love with the place when we worked here. It’s important for the community, and although it’s a lot of work and a lot of long hours, we love it here,” said Noyes.

McCormick’s offers gas, diesel, propane and oil for locals and visitors alike. The store carries all the essential groceries, as well as confectionery, tobacco products, lottery products, has a frozen food section and carries locally-sourced produce when it is in season.

But, adapting to the changing retail landscape as well as consumer demands, Noyes and Martin have added a small Country Style franchise and a few years later a Square Boy Pizza franchise within the confines of the store.

“A year or two after the purchase we brought in a convenience store guru and he suggested that we bring in a brand name coffee. He said that was the number one thing that convenience stores needed to bring in based on consumer demand. Country Style was interested so we brought them in. We did have to make some changes and promise them certain things, as you do in a franchise arrangement, but it’s been a good thing,” Noyes said.

McCormick’s entered the contest, with bringing in the Square Boy franchise as the plan and won a $50,000 interest-free loan which helped them accelerate the process of bringing the pizza offerings to fruition. The pizza is a popular item since 2009 for folks making the commute to and from Kingston and other points south, but there is also a popular delivery component, especially on weekends.

Noyes said it is by diversifying and listening to what their customers want that has allowed them to be successful over the years.

“We recently brought in gift ideas for different occasions and times of the year, as well as candles – a lot more ‘country’ things. We do a lot of seasonal stuff, including fireworks. We have made a lot of changes over the last 13 years, but it’s by adapting that has allowed us to be as long as we have.”

McCormick’s was opened many years ago by the late Larry McCormick, a beloved community leader and former Member of Parliament, and his wife Reta. Under their stewardship, the store became almost a de facto community centre – a gathering place and hub for spreading community news and information. Through the Martins and on to the current ownership tandem, it is still a significant locale in the Camden East community.

“We have guys that come here every morning for coffee and another group of people who come in the evening to just meet up and start some gossip,” Noyes said with the chuckle.

“And this is such a lovely place to live and work. We have one employee here, Annabelle Skinner, who has been here at least 30 years – since the McCormick’s owned it. We couldn’t live without her. She is wonderful for the community.