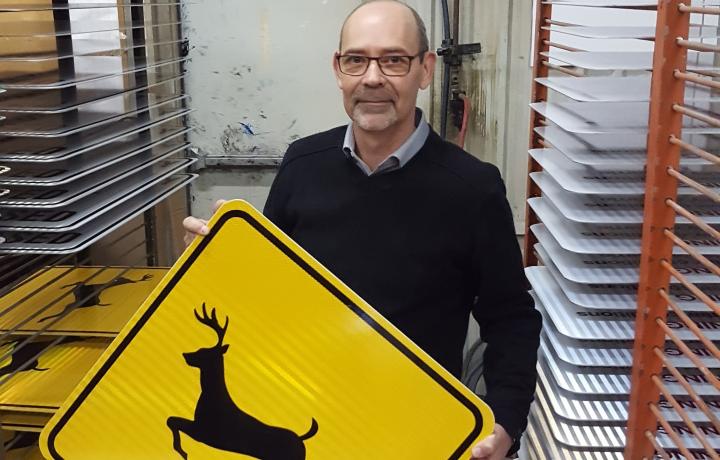 Ron Haslam has been in the sign business for pretty much his entire working life. It’s his passion, not just his vocation. And his commitment to excellence, pride of purpose and a resolute policy that customer service is king has meant his firm, Maximum Signs, has been the ‘go to’ sign company for municipalities, developers and lots of other organizations for the past 28 years.

“I left school when I was 15 and got a job in a sign manufacturing company when I was 16 and I just had a natural knack for it. I discovered that I was pretty good at it. Then when that place closed I ended up at a company in Oshawa and worked there for about seven and a half years. I got married, had kids and decided that I was going nowhere working for somebody else and decided to quit and start my own sign business. That was in 1990 and that’s when I started Maximum Signs,” said Haslam, who said his company currently employs approximately 20 people.

“I actually rented a guy’s garage in Blackstock for a bit and then moved to Nestleton and then relocated to Pontypool. This is my second building in Pontypool [located just off Highway 35 at 17 Sandbourne Dr.]. And actually right now we’re putting on an addition so when we’re finished the facility should be at around 20,000 square feet.”

Maximum Signs deals in orders both large and small, focussing more on custom projects in recent years. They are an approved and accredited dealer of 3M products and have worked with municipal officials, corporations and smaller companies all across Canada with their responsive, efficient and effective customer service and superior products being the main seasons for their steady growth over the past two and a half decades.

“We’re actually a one stop shop for just about anything in the sign industry. We have a laser that will cut inch-thick steel. We have iron workers and a mill and lathe to fix our own equipment. We have digital imaging machines, our own presses – we’ve got just about everything you can imagine in the sign business. Basically, we’re the top of the food chain when it comes to equipment,” Haslam said, adding that from the earliest years of the company, profits were always reinvested.

“As the business started to grow, anything that the company made as a profit was put back into the company for equipment to make us that much better. And over the years we have stuck to our guns. We only use 3M products, which guarantees they are the best. We stand behind everything that we do. If there’s a problem, we’re on it immediately. I think the big reason for our success is the customer service and being honest. Honesty and integrity are the big things for me.

“And we make sure to keep our standards up. Our shop is certified every year by 3M to assure that we’re doing everything correctly so that when we put a sign out there, we know it’s going to last as long or longer than we say it’s going to last and will be done the right way every time.”

That reputation for both excellence in products and services have meant that the vast majority of business coming Maximum Signs’ way has been through word of mouth and referral.

“We only go to one trade show a year and that’s the Association of Ontario Roads Supervisors [AORS] one. We do have a salesperson who works part time, but most of the work has come from word of mouth. Say a person works for one city for a number of years and you build up a rapport with them., Well, they may move to another community and when that community is looking for sign work, they will recommend us,” Haslam said.

“We tend to keep all of our customers. Anybody who has ever left us has always come back. Everybody is worried about price and the truth is you can get something for next to nothing, but if they don’t deliver on time and the product doesn’t last very long, then it’s no good to you. We get them the best products and we get it there on time. Everything we do is for our customers.

“We have a lot of different customers. When I started out it was mostly government contracts, so we would all be bidding on jobs and of course the lowest price gets it. But you know, as the years have gone by, pricing has gotten ridiculous. People have become so unrealistic about what they are charging that we don’t really compete in that market any more. We deal with the towns and cities that don’t go that route.”

Another key to the success of Maximum Signs is the dedication and hard work of the employees, many of whom Haslam said have been with the firm for 15 years or more.

“Every day is different, you are not doing the same thing all the time and I think people like that. It also allows you to be creative and solve problems. When I started the business I did everything; I did all of the silk-screening, I did the metal work, I did the welding and all the paperwork myself. As things have change, I got very capable employees and I don’t do much of anything anymore,” he said with a chuckle.

“We have really good employees that care about what they do and it’s actually a matter of pride to them too. I have got some folks who go away on holidays and say ‘hey, I saw our signs in Calgary.’ It’s interesting because lots of people go to jobs that they don’t like, and I understand that. But out place is, I think, different. And it’s because you don’t go in there and do the same repetitive thing every day. There’s a million different things to do in our shop. Once day you could be making a 40-foot panel sign for the Toronto Island Airport and the next day you could be making decals out of one-inch round.

“We get all sorts of stuff coming in here. Someone will bring in an illuminated sign and it’s been destroyed and we’ve got to look at it and figure out how to build a new one that will work and be stronger and better. And my employees do that now. I don’t have to anymore because I have some really good, creative people in there to take care of stuff like that.”

Being located in the rural Kawartha Lakes region has also been of benefit to Maximum Signs, as the proximity to Highway 35/115, Highway 401 and the soon to be complete Highway 407 extension meant easy access shipping in or out of the Pontypool factory.

“We have trucks going east, we have trucks going west, and trucks going north and south. It’s less than an hour to downtown Toronto. So we can send out driver out to the far west or east of the province or way up north and he’s back by the end of the day. Once the 407 comes in it will be even better because we have a lot of guys coming in from Toronto to pick up from us and I do think we lose a little bit of business because it’s a hassle for them. Once the 407 is in, though, it will be great. It will take them less time to come here from Toronto than it will to drive from one end of the city to the other,” said Haslam, adding that he and his employees also love living in the more placid and picturesque surroundings of the Kawartha Lakes region.

“We raised two boys out here and now my one son is married and he is living out here too with his wife and kids. Most of our employees are family people and they have kids and grandkids and it’s just a great place to raise a family.”