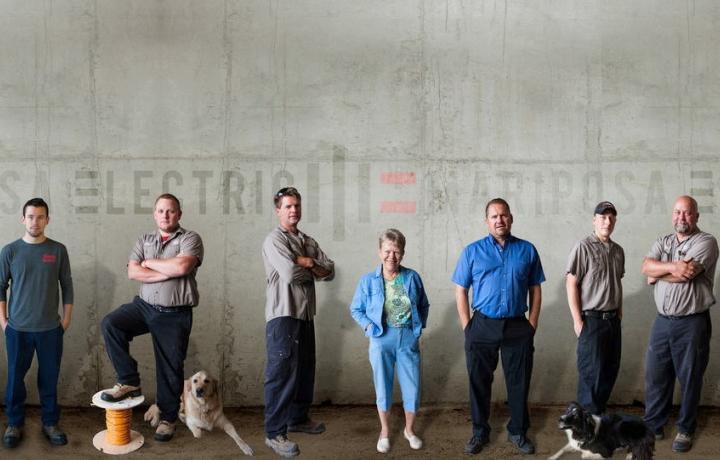 For a little more than a quarter of a century, Lindsay-based Mariposa Electric has provided excellent, responsive service and quality work for residents of the Kawartha Lakes region and beyond, based on fundamentals of superior workmanship, treating customers well, and ensuring that the business and staff supports the community.

It’s a recipe for success that began when two formerly independent electricians chose to partner up, proving the adage that the whole really is greater than the sum of its parts.

“Dave [Holliday] and I have been full partners right from day one. Dave does a lot of the onsite stuff and I do a lot of the office work, which works out perfectly because I actually prefer to work in the office and he loves to be out there getting his hands dirty on the job sites – it’s a good marriage that way. And another one of the key components to the success of this business, something that we both agree on, is hiring good people and getting out of their way and letting them do their jobs. We’re not here to throw up a lot of roadblocks along the way to hinder our crews from doing their best,” said Mariposa’s other co-owner, Don Brown. Both he and Holliday are master electricians.

Brown and Holliday grew up together in the same small town of Oakwood. In 1990, when things were slow, they decided to start a business together and called it Mariposa Electric.

“We started out with a location in Little Britain and another small one in Lindsay and we sort of split the territory between us. But then we came together on Commerce Place, getting a bigger spot and a bigger office building, which helped to really streamline the operation and make us more organized,” said Brown, adding that much of Mariposa Electric’s work is for the residential and commercial sectors.

“We do a lot of farm-related work, like doing the electrical for the milking houses, chicken farms, beef operations. We also do a lot of work on new home projects as well as renovations and upgrades. For the commercial clients we do a lot of their service and maintenance as well as a lot of back-up generators.”

The business has grown substantially over the past 25 years, to the point that there are now 35 people on the Mariposa Electric payroll. Brown said being active in the community, and having a good word-of-mouth reputation has been crucial to the company’s success.

“We do a lot of advertising with a lot of the sporting organizations around the area, including hockey teams, baseball teams and so on. I do believe word of mouth is your best form of advertising and we have done our share to create that word of mouth. And it’s done in a two-fold manner; it’s about being involved in the community and then when it comes to your work, it’s about doing what you say you’re going to do, when you say you’re going to do it,” Brown explained.

“Sometimes in business you can get 90 per cent of the things done for a project but that last 10 per cent hangs over your head. But we do what we say we’re going to do. And over the course of the years I think we have developed a reputable name because of that. I don’t want to sound cocky or anything but one of our big things is doing what you say. In a smaller community like Lindsay and the surrounding area, word gets around if you live up to your promises or not. At this point in our company’s development, I know that we have the staffing to be able to handle pretty much any job we’re offered.”

But it’s not like it’s easy to live up to your word all the time. It takes a capable, adaptable, competent staff on the ground, as well as an efficient and well organized structure at the top. Brown admits it’s been a challenge over the years to keep up with growing demand, while maintaining their excellent service and work rate.

“Some of our earlier challenges at the beginning involved us getting the jobs done when it was just the two of us. In that first year or so, I think David had to milk cows over the winter time to make ends meet and I stripped wire for the first year in business. After it started to grow, we didn’t need those second jobs any more. Then midway through our growth process, getting good quality people to work for you was a challenge too, but we believe we have done that and continue to do that as we keep growing,” he said.

“So the challenge now is making sure we’re using our crews and our other resources in the most efficient and effective way possible to keep up with the work. But the bottom line is that we have a bunch of guys who have been with us for 15 or even 20 years – a core of four of them – and they are basically completely in charge of many projects. The challenge now is keeping up with the bigger projects and getting good quality people to work with these core guys who are in charge.”

Another challenge is ensuring that Mariposa Electric is in compliance with all the various government rules and regulations – again, something that gets more complicated as the jobs and the company gets bigger.

“There are a lot of things you have to do that you never used to have to do, so keeping up with all that is a challenge. A lot of it is training and those things are now just another cost of doing business, and it’s something we do have to sometimes explain to people. And our clients understandably want justification for it. But we explain to them that these are things that we are mandated to do. So just keeping up with all that on an administrative level, which is what I mostly do, is an ongoing challenge,” Brown said.

Growing up in the area, and with the vast majority of their staff also residing in the Kawartha Lakes region, Brown said he encourages his employees to continue to support other community businesses and organizations.

“I like the fact that we have the lakes and rivers and that we’re rural but we’re close enough to places like Peterborough or Oshawa or even Toronto to go do things. So it’s the best of both worlds, and there is a lot going on in our area too. It’s just a great place to live and do business.”