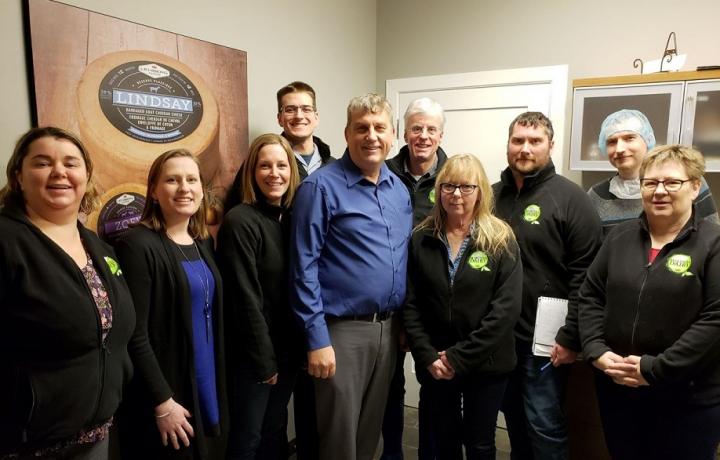 The Remarkable Rise and Sustained Success of Mariposa Dairy

It is an amazing phenomenon to see a business that started off simply as a passionate part-time project turn into a large-scale and industry leading enterprise. This is exactly what has happened with Lindsay, Ontario’s Mariposa Dairy.

Demonstrating a remarkable foresight, the husband and wife team of Sharon and Bruce VandenBerg chose the creation and sales of tasty varieties of goat cheese as their modest entrepreneurial endeavour nearly 30 years ago. It was seen as a niche, artisanal product at the time that could be marketed to a small minority of folks (primarily urbanites) who were very conscious of dietary restrictions related to bovine dairy products, and those who had developed a penchant for more natural-based, small batch-made products.

Never in their wildest dreams did they figure that seemingly limited market would explode to include tens of millions of people throughout North America. But it has.

Mariposa Dairy now employs more than 120 people, and processes close to 20 million litres of goat’s milk each year. The company sells 70 per cent of its products in the United States and is responsible for processing approximately 40 per cent of all the goat’s milk harvested in Ontario.

“We started at the right time, when hardly anybody was eating goat’s milk cheeses. And then it became a niche and now it’s become something that you find in the weekly shopping cart of millions of people in Canada and the United States. So, we were in the right spot at the right time when we started in 1989. We’re going to be celebrating 30 years next year, which is not bad considering it was just going to be a part-time business for my wife,” said Bruce VandenBerg, talking about the exceptional growth of Mariposa Dairy, which saw it move into a massive industrial-scale facility in Lindsay in 2017.

“Just 10 years ago, Sharon was the entire quality control department and today we have five full-time people doing quality control. And, as we have grown we have ensured that every piece of equipment that we buy will do the same recipe that we have always followed.”

Growth has meant adaptations and the occasional growing pains, but from day one, VandenBerg said Mariposa Dairy would face every obstacle related to the near-exponential increase in business head on, never refusing a deal no matter how big the order would be to fill.

“Every time we were given an opportunity we figured out how to take advantage of that opportunity. If we got volume that we couldn’t handle, instead of saying no, we figured out a way that we could handle the volume and we have had lots of people help us get there. I remember my controller and my managers once telling me ‘Bruce, you can’t do that because you’re not going to get any money.’ I said I need that order to get the volume so I can become more efficient so I can make money. And nine times out of 10 that has worked,” he said, adding that one of the primary reasons for the amazing growth of the business is that, in general the market for goat and sheep cheese has become nearly limitless, especially over the last decade.

But the product being sold must also be of excellent quality. The key flavoured soft cheeses are now staples throughout the industry, propelling demand ever higher.

“It’s a very healthy product. It is easily digestible by a lot of people, but more importantly it’s a product that young and middle aged, health-conscious people want to enhance their lifestyles. There are thousands of gatherings and parties or special events that feature our cheeses these days. Our cranberry is the one that really put us on the map. And our plain and herb and garlic varieties too – they are the big three and the biggest movers. And we have some unique dessert cheeses like apple and blueberry, as well as honey,” he said, adding that many of the recipes are actually suggestions from distributors, which are relaying the demands of their cheese-buying customers.

As previously mentioned, there have been challenges created by the growth, which VandenBerg and his team have managed to handle. But they are challenges nonetheless and ones that are ongoing. In order to help with capital outlay for new equipment to help create more efficiencies in the cheese plant, outside partners were enlisted, one of whom is Mariposa Dairy’s distributor, Finica Food Specialties.

Finding qualified skilled workers is also a perpetual issue. “We honestly didn’t realize we were going to keep growing. We have grown way past wherever we thought we would be. I didn’t lay in bed all those years ago and say to myself that we were going to have 120 employees. That was the farthest thing from my mind. The hardest part of the job has been hiring people who can grow with us. Many times you hire people and they’re great for a while, but suddenly three or four years later you are letting them go because they could not adapt to the growth and changes that happen because of that growth,” he explained, adding that these are, ultimately, good problems to have.

A few years ago, the VandenBergs realized that it was too much work to both own and run their burgeoning cheese factory and manage the farm and goat herd that supplied the raw materials. So, they sold to an experienced goat dairy farm couple from Holland, Martin and Sonja Bons.  They came to Canada because their goat farm in Holland had grown to capacity and there was no room for expansion. At the time they had 750 goats, and when they came to Canada and made a deal for Lenberg Farms from the VandenBergs, they instantly nearly doubled that total, inheriting 1,300 goats.

“My wife was looking after the farm and I was looking after the cheese plant and it was just too much for both of us. If we didn’t do something there would have been problems. So, we needed a solution and it turns out that we had to go to Holland to find that solution. But it’s been an excellent, seamless change for everybody,” VandenBerg said.

Partnership with various other industry resources as well as with different levels of government have also been a critical reason for the company’s elevation to being one of the largest private sector employers within the City of Kawartha Lakes.

“It is very important to develop partnerships. If you think you can do this on your own, you might as well stick your head in the sand because it will be there shortly. Over the years we had buildings that we leased-to-own with people in the community. Everything we do, every business transaction we make we try to make sure everybody benefits from it, which is why we work with as many other local companies and suppliers as we can,” VandenBerg asserted.

“We plan ahead and go to the different levels of government to tell them what we are planning, sometimes up to a year ahead to let them know where we feel we will need help. You can’t really do that after you’re already in trouble. You’ve always got to be thinking a year or two ahead and then you bring them in and let everybody know what’s going on and be really transparent about it. So, I would say that approach has been one of our biggest successes, because it has led to us receiving many grants.”

As for the future of Mariposa Dairy, VandenBerg said he wants to see the company keep growing and prospering so that succeeding generations of his family can reap the benefits of all the hard work, innovation and success.

“With the plant that we built, we’re only at 60 per cent capacity. Our goal is to keep putting better equipment in here to make it more efficient, raise the skill level of our staff by teaching them the craft and how to run this equipment, because we do have to automate more. We have automated a lot but we need to do more,” he said.

“And hopefully 30 years from now, my grandchildren are running this business, or at least involved in the business because they have had the foresight to hire the right people to run it.”

For more information on Mariposa Dairy and their exceptional line of chevre and hard cheeses, visit https://mariposadairy.ca.