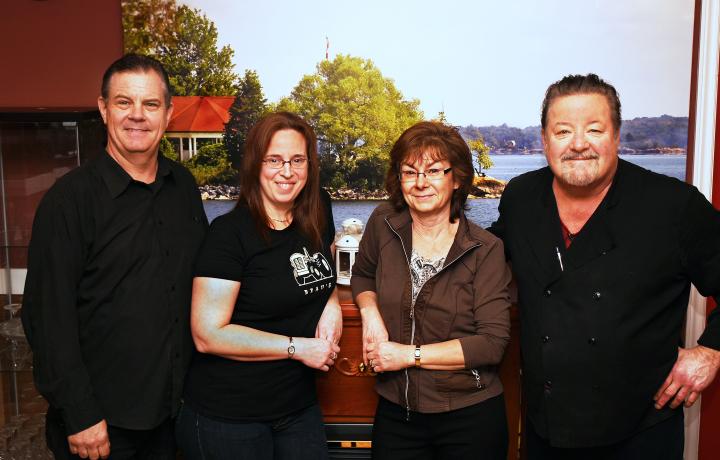 It’s an old adage in life and in business that sometimes something really good can come out of trying circumstances. For Brockville native Dale Donnelly, when a long-term position came to an end, one that seemed like it could be the job from which he retired, he simply ‘pivoted’ and chose to become his own boss.

Donnelly is a Red Seal certified chef, meaning he is at the top of his profession. And he has held this designation for many, many years – since he was 19 years old, in fact. For the majority of his career, he worked for others as a chef, often running much of the administrative side as well as the kitchen, its staff and settling upon menus. Since shifting career gears five years ago, Donnelly has been the owner/chef of the immensely popular Mallorytown’s Landing Restaurant and Trattoria in the small, picturesque community, just minutes north of Highway 401 in Front of Yonge Township.

This summer he is opening a second establishment, this one a seasonal affair – Donnelly’s – along the waterfront in Ivy Lea, very near to the Gananoque Boat Lines dock (he is also running the food service on the cruises as well).

He expects to have similar fare at the new establishment, building on the reputation for culinary and service excellence he’s established at Mallorytown’s Landing.

“I live here and when I knew I had to make a move I knew about this place and I knew I wanted to stay here at home. I decided to take the chance; it was a bit of a risk, but I knew that the community needed a place like this. It needed someone to take it over and provide a really high quality restaurant that would attract not just locals, but people from around the area or tourists passing along the 401. I put a lot of time, effort and money into renovating the place and getting it up to a really high standard and I think it’s paid off because the people in the village are really proud to have a nice restaurant,” said Donnelly, humbly adding he isn’t quite sure why the place is so highly favoured amongst travellers, but he isn’t complaining.

“I don’t know what makes it special other that it’s a cozy, and I guess there are a lot of people who like fresh food made in-house with fresh ingredients. So I know the food is appreciated but I also think people keep coming back here because of the service too. It was a challenge in the beginning to get qualified servers because we are pretty small and there were growing pains and not a lot of opportunities to make big tips. But now the servers I have are amazing, and they are very happy with the pace of work  and what they leave here with each night.

“I feel safe opening the second restaurant because I know Mallorytown’s Landing is in great hands. I have people doing the front of house who are well known in the community and who have been doing it for many years. I have cooks and chefs working for me who have decades of experience with every aspect of running a kitchen and a restaurant. It’s a great team and it’s that experience and quality that, I think, has made the restaurant the attraction that it is.”

Donnelly was born and raised in Brockville and has been in the restaurant/food service industry since he began work at the New York Restaurant in Brockville as a 13-year-old. While there, he was encouraged, and worked diligently, to gain an understanding and proficiency with all aspects of running a kitchen and a restaurant.

“There were as many generations of my family that worked there as there were owners’ family members. My grandmother worked there, my mother worked there, I worked there and all my brothers worked there. The treated me like family from day one and they kind of brought me along. I was a dishwasher at first and then they got me into prep cooking, then they gave me a job of being almost like a controller where I was doing all the inventory and ordering. When there was a need for more cooks in the kitchen I did that. And then they sponsored me to go to school and get my chef papers. So I went to Algonquin College in Ottawa where I got my Red Seal at age 19.”

Graduating at the top of his class, he was given whatever plum assignment he wanted, choosing the five-star Constellation Hotel in Toronto right near Pearson airport. Not even 20, Donnelly became a chef in the hotel’s first-class Burgundy Room. But he disliked the city lifestyle, spending more than an hour in the morning and again at night on public transportation, barely seeing a tree, never mind a river, lake or stream.

So he returned to the 1,000 Islands region for work, also spending some time in Ottawa. His last job before opening Mallorytown’s Landing was as the head chef of the Shorelines 1000 Islands Casino for a decade before it was privatized.

“Once I got back here, I never really left. I have continued to live in the area. I even commuted to Ottawa every day from Mallorytown when I was working there because I wanted to come home to this community. I love boating – that St. Lawrence River is just a huge attraction for me. I don’t think I will ever leave here,” he said.

Donnelly’s is expected to cater to tourists primarily, and will be open from May to the end of October. The atmosphere will be immaculate – especially when one considers the breathtaking view that will be afforded to the many guests who will be able to dine on either one of two big patios.

“It’s going to have a mid-to-upper scale menu, a full bar including a nice wine list. It’s not going to be so high end that most people think they can’t get in. We want people to feel free to come in with their shorts and t-shirt and flip flops, get a nice organic burger and full draft of craft beer or nice bottle of wine. I want everyone to be able to experience that view and that spot on the river. There is no better view anywhere. It’s going to be a great place to come spend some time and relax, and enjoy a great meal.”

For more information on Mallorytown’s Landing, visit their Facebook page at https://www.facebook.com/MallorytownsLanding, or in person at 1489 County Road 2, Mallorytown.