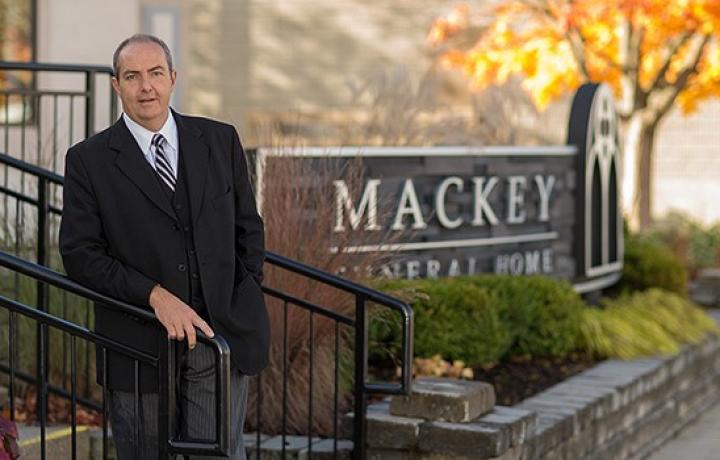 Mixing Progressive Ideas with Traditional Values One of the Keys to Mackey’s Century-long success.

Linden Mackey’s grandfather had a vision of a way to not only improve and expand his business horizons, but be on the forefront of life celebrations for his friends and neighbours in Lindsay, Ontario.

The founder of Mackey Funeral Home Inc. in 1916, James Mackey believed there needed to be more options for celebrating the life of a deceased person – and even to celebrate life and family in more general terms. – in a comfortable setting that mixed the traditional needs of a family during a time of grieving, with changing desires for how those occasions should be marked.

“It was in 1941 that my grandfather decided to open a chapel in the funeral home. It was part of a dream that he originally had when he started 101 years ago. He wanted to create a space where people didn’t have to go to someone’s home, so he created the chapel at the funeral home and had it designated and consecrated at a ceremony in May of 1941,” said Linden Mackey, or Lindy as he prefers to be called.

“And we’re going to do something similar with the new Celebration Centre that we have acquired.   In October [2017] we will have an open house and dedication ceremony. We see this as a continuation of his vision. The funeral home and chapel are going to remain the same. It will continue to provide traditional and non-traditional funerals, cremation ceremonies and other funeral care. We purchased the former Queen Street United Church and changed it into this special facility where we can do anything and everything regarding life and celebration – weddings, funerals, birthday parties, fashion shows, dinner theatre. Basically, you tell me what you want and I will put it there. We’re negotiating having a CD release party for a band.”

A trio of key factors have contributed to the success and growth of Mackey Funeral Home over the past century. One is the extraordinary level of dedication of the staff and their commitment to serving the approximately 260 families who come through the doors during an average year. There are currently four, full-time Class 1 funeral directors on staff, three administrative staff and three part-time assistant funeral directors.

“The group here is very dynamic and energized in what they do. They have no problem working overtime either being here early or staying late. They are a great group who like to work for the community. They believe in our philosophy of customer service which is based on the ability to say, ‘we can look after that for you,’ as opposed to ‘oh, I don’t think we can do that.’ We are in the building from 9 a.m. to at least 8 p.m. every day. We have staff on call 24 hours a day though. So we have a very dedicated group of people who are willing to go above and beyond and make sure all aspects and needs are looked after,” he said.

“Whether it’s redesigning or creating a customized stationary component, or having a custom urn created locally at Northern Casket, or if you want something special done with the casket, we will do it. For example, we glued glow-in-the-dark stars to a casket because a family had wanted this for their loved one.  Anyone who came to the visitation glued a star on the casket. It is things like this that make a funeral more meaningful. I believe that’s what makes us different from other service providers.”

The second component is the fact that Mackey’s is still a family-owned and operated business, serving essentially their friends, neighbours and colleagues for over 100 years.

“Sometimes I don’t consider the importance of it being a family business for all these years because I don’t see the forest for the trees. But I do recognize there is value to family business. I am looking at the wall of my office and there’s a picture of my grandfather in 1931 and my dad in 1963 and I recognize that legacy. I think we just live it – when the lady pulls you aside to say she remembers changing my diaper when I was born in the local hospital, it’s those kinds of relationships you can’t find anywhere else. I mean, listen, I live three blocks away from the funeral home and you can reach me 24 hours a day, seven days a week, because I want to support and help the people in my community,” Mackey said.

And thirdly, it’s the forward-thinking nature of the Mackey’s themselves, from grandfather, through to father, uncles and now to Lindy, whereby they strive to meet the changing needs and desires of families in the 21st century.

“What we did 100 years ago is a light year from where we are today when it comes to tradition.   I think people need to know that we can accommodate their needs. And that while we respect the traditional approach, new traditions are whatever people want to make them. People are not selecting visitations much anymore and we don’t have many traditional, sombre funerals much anymore; it’s more of a celebration event where you have videos of family and memorabilia, we put a canoe and a motorcycle in the visitation room. We’re even discussing an occasion for someone who has not passed away yet to have, for lack of a better term, a wonderful ‘going away party.’ There is a completely different philosophy towards end of life these days,” he explained.

“Religion isn’t necessarily as significant and there are also varying types of faith groups, varying types of alternative spiritualties and non-spiritual people. And because the region is growing and becoming more diverse, we need to be able to welcome people and adapt to their family’s needs.”

Besides the satisfaction Mackey feels in being able to provide such a meaningful service to his neighbours, he also loves the lifestyle living and working in Lindsay and the City of Kawartha Lakes offers.

“You can take a walk for an hour and come across open fields, new subdivisions, offices and industrial parks – it’s all part of the same community. You can ride a bicycle to Peterborough to Minden, Cannington or Sunderland on a trail where you will seldom see a car, but you might see a fox or a deer,” he said.

“We have lots of culture, a great theatre with live entertainment, professionally prepared shows through Triple Threat Theater and Globus Theatre at the Lab, music in the parks and community halls all at different times of the year, together with the newly formed Arts Council Lindsay and area are well on their way. I believe it takes a community to raise your family either old or young. Your friends and neighbours are ready to help support you. We have a pretty diverse economy, with great tourism. We are fortunate to have the Frost Campus of Fleming College, and great local elementary and high schools. With lots of sports and recreational opportunities for all ages. This city really is a jewel, and not being far from Toronto. Lindsay and district is a wonderful, welcoming community.”