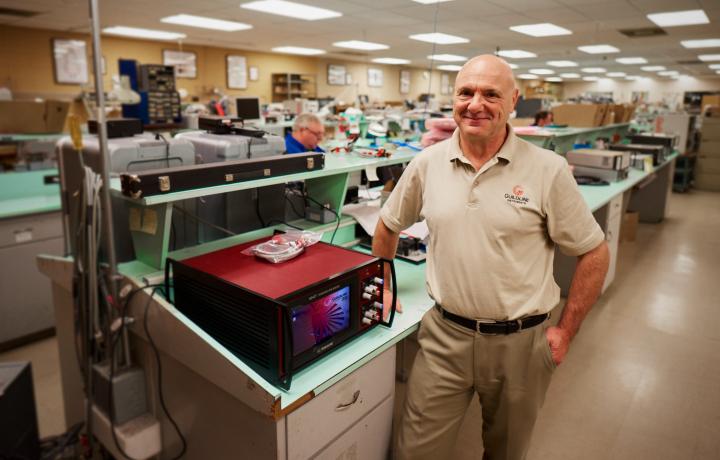 Guildline Continues to Be a World Leader

Guildine Industries is proof that you can be a world-class, industry-leading manufacturer in a highly technical and specialized field and yet still be based in the lush, beautiful rural landscape of Southeastern Ontario.

The firm will mark an incredible 60 years of operation in 2017, having been founded by four British researchers in the Town of Smiths Falls back in 1957.

Current Guildline president Richard Timmons said the four arrived in Canada a few years before 1957 to set up a branch research facility for a larger UK-based company near St. Jerome, Quebec. When that facility shuttered its doors, the four had already fallen in love with their adopted country and decided to stay, raise families and begin their own company, which would also allow them to continue to do their innovative work.

They realized in the post-Second World War technology boom, and the accompanying Cold War and Space Race, there was a high demand for sophisticated metrological instruments for various industry, governmental and research organizations. They also understood that a prime location would be somewhere not far from the Canada’s capital of Ottawa. This was because there would be greater availability of workers with the appropriate skills and training, but it was also close to the National Research Council, the centre of research and innovation for the nation, and also a place where there would be tremendous opportunities for networking with industry.

The company’s instruments are now considered to be the true gold standard for the metrology [measurement science] industry and are indeed the official standard instruments in at least 55 countries around the world, according to Industry Canada. Essentially, Guildine builds highly sophisticated, ultra-sensitive and breathtakingly accurate instruments to measure the various aspects of electricity.

Timmons said that Guildline, which has 36 employees at present, ships 98 per cent of their wares outside of Canada, with 45 per cent of that business going to the U.S. Other markets include Europe, the Far East and increasingly, China.

Being located in Smiths Falls is actually seen as a benefit for a number of reasons, according to Timmons.

“Honestly, we are not lacking for anything here. There is an advantage to being located where we are with respect to transportation. Since we have so much business with the U.S., and we’re so close to the border, we have a truck scheduled every day to go back and forth to the border. That means it’s very inexpensive to ship to the U.S.,” he said.

What has been the biggest challenge for Guildline over the years, and continues to be to this day, is that a significant portion of the company’s resources always have to be allocated to innovation and R&D.

“It takes a lot of research and development to be a world leader in this field. So I mentioned that we have 36 employees. Out of those 36, 14 of them work in research and product development – which is a very high percentage. So the challenge remains how does a small company, located in eastern Ontario stay as world leader in a particular area? We stay there because we put the money into R&D,” he explained.

Another challenge is the company’s primary competition.

“We do have one main competitor and it is a group of ex-employees who historically have copied our products. How we countered that is, for all our new products developed over the last number of years, we have made sure they’re patent protected. So I will not develop a new product unless I can get a patent for it. That not only protects us from being copied by our main rival, but also from very large international companies that might want to copy the products we’ve developed,” he said.

Timmons knew a good investment when it came along. Initially brought on board to help right the ship during a financial and leadership crisis, he has been Guildline’s president now for a decade.

“They had some trouble about 15 years ago and brought in an outside investor to help. It turned out that investor knew me. We’ve known one another for 35 years and have worked together in the past. So 10 years ago the president of Guildline died suddenly and the investor asked me if I could help run the company while he looked for another president. I was a consulting engineer at the time, so knew the business. To make a long story short, I liked the company so much I bought it. I am the majority shareholder, the outside investor still has a significant stake as does our sales director who is based in the U.S.,” he said.

Finding qualified employees has actually not been a difficulty for Guildline as so many people want to work for a ‘winner.’

“For the manufacturing and administration side of the business, we have very little problem in recruiting people. Most of our employees are from the area, or have moved back to the area and when they look around for employment, they see Guildine and what a good company it is. On the engineering and R&D side, most of our design engineers were not only recruited out of Ottawa, but they still live in Ottawa and reverse commute to Smiths Falls. And for the most part we don’t have any trouble recruiting them either. I would say half of our R&D staff actually approached us. They find out what we do and they just want to work for a world-leading company that does interesting stuff,” said Timmons.

Timmons also said that the enviable rural lifestyle and cost of living in the Smiths Falls area is also an attractive aspect of working for Guildline.

“The feedback I get from the employees is that it’s about 1/3 or less the cost to live here than to live in Ottawa. The other thing I hear is that people like to live and work in a small town. They like the sense of community, the fact that the schools are smaller, and everyone knows everyone else,” he said.