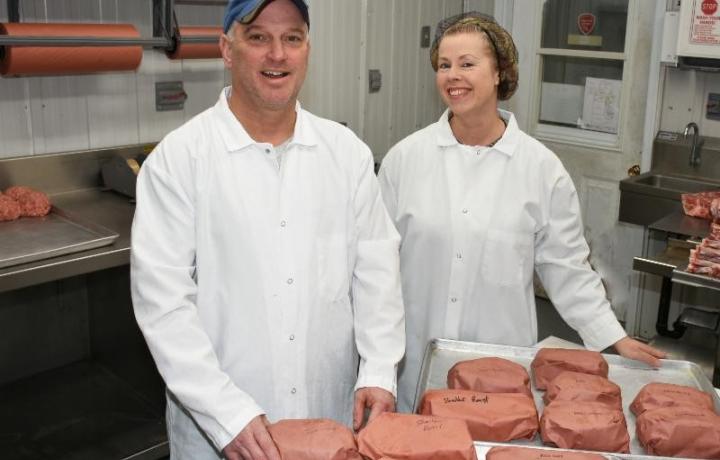 Located at 63 Addison Road just minutes from Athens, the newly opened abattoir is doing a lot of business. FCA is a not-for-profit corporation conceived in February 2016 to address an urgent need in Leeds and Grenville for livestock slaughter services to local farmers. Eastern Ontario has lost 35% of its provincially licensed abattoirs over the past 10 years.

"It's been a community effort," says Barbara Schaefer, chair of the board and a heritage swine farmer. The number of abattoirs was already very low when Rideau Meats in Smiths Falls closed in February 2016. Then came word Lynch's Slaughter House in Lansdowne would be closing too. There are approximately 1,000 producers in this catchment area requiring services.

"Your processor is your most important partner in livestock farming," Barbara says. If the region was left without an abattoir, area producers would be driving long distances for services. She felt she had to do something and thought re-opening the former Athens Meat Packers facility would be a great solution. It's a newer building, has a circular drive and an expansive livestock holding area.

It was no easy task. She formed a team to raise money and renovate the building to strict food security standards. Capital costs were sourced through loans, membership fees and donations. Thousand Islands Community Development Corporation (TICDC), the Business Development Bank of Canada and a private investor helped, Barbara says.

FCA opened in October 2016. Services include slaughter, custom cutting and wrapping, sausage making, curing and smoking. It will soon offer clients the option of vacuum packaging, weighing and labeling at a nominal cost.

"The purpose of FCA is to provide a long-term, secure and reliable service to farmers so they may better plan and operate their farm businesses. People support local food. Services, including meat processing, should be increasing not decreasing," she says.

Currently FCA accepts a range of domestic farm animals, including cattle, sheep, lamb, goats and swine. Long-term goals include the establishment of a poultry service. They may consider becoming a training facility for new butchers.

"There is great potential to make this facility into a model for progressive livestock processing. Under the direction of the board, staff and membership, FCA will look to break new ground," says Barbara. With a voting membership, FCA will operate in perpetuity. Memberships are $1,000. FCA has received donations and memberships from farmers, restaurateurs, chefs, butchers, retailers and consumers. Donations of any denomination continue to be welcomed.