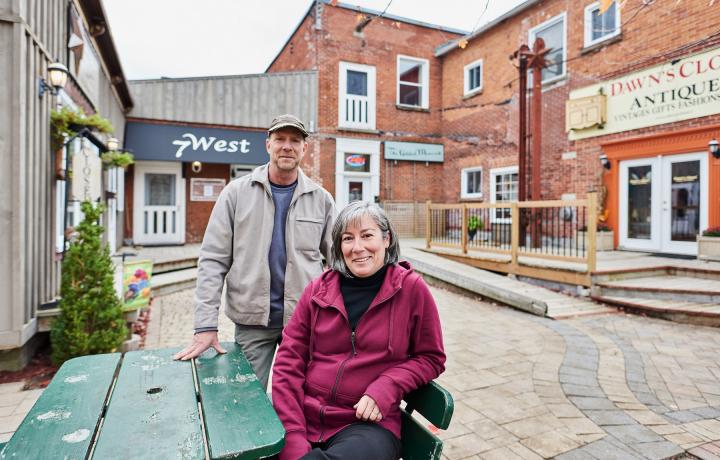 Every small town has that one local icon, a location or venue that is rife with memories for locals and with a rich historical background that draws interest from visitors from the surrounding community and beyond.  In Smiths Falls, that icon is Davidson Courtyard, once home to the well-known Davidson Bakery and today a popular destination for shopping and dining in Smiths Falls.

Situated at 7 Russell St. W., Davidson Courtyard is an architectural gem, typifying the brickwork construction common to the community from its inception to today.  Its central location in the core of downtown Smiths Falls, along with its long-standing history as a local business and industrial hub has made it an integral part of the community since its construction in the 1880s.

Today Davidson Courtyard is home to a number of small businesses, including Dawn’s Closet, The Gilded Monarch, The Mercantile, Autumn's Fine Flowers and Café Whim.

As such an important building garnering nostalgia within the community, it’s fitting that Davidson Courtyard has been named the funding recipient of the Town of Smiths Falls Community Improvement Plan (CIP), and the beneficiary of a number of renovations and improvements designed to maintain the location’s local importance for many years to come.

In Ontario, the designation of a CIP area allows a municipality to provide financial incentive for investments into improvements and maintenance to businesses located within the CIP zone.  The goal of a CIP is to promote economic sustainability and quality of life in the community, and assist the downtown core in continuing to be a destination for residents and visitors by leveraging private investment.

In 2013, Smiths Falls officially approved a CIP document, with a designated area focused primarily within the downtown core. Davidson Courtyard was the second recipient of CIP funding through the program, and owners Lyne Houle and Scott Taylor’s application was welcomed by the Town as a means of preserving such an important community asset.

“This is why the CIP program exists, to support the growth of local businesses like Davidson Courtyard, while preserving and maintaining the buildings that lay the foundation for our community,” Economic Development Manager, Cyril Cooper explained, “The future of our community depends on economic expansion and we’re pleased to provide businesses with the tools they need to grow.”

Houle and Taylor’s plan for the property is to preserve what they have called its unique “vintage industrial” theme, and to more firmly connect with the location’s industrial history.

“We want to keep the character of it and embellish it a bit, turn it into a commercially successful property,” Taylor explained, stressing that the CIP program has been instrumental in allowing them to fulfill their vision for the property.

Houle and Taylor’s application outlined a proposal to provide much-needed improvements to the brick façade, central courtyard area, signage and renovations and upgrades to Unit E, formerly a restaurant. Overall, the components of Houle and Taylor’s application will collectively improve and maintain the character of the building for generations to come.

Many of the improvements outlined by Houle and Taylor will provide necessary maintenance on the exterior and structural elements of the buildings in the courtyard, without which Taylor said the property would quickly slide into a further state of disrepair from which the only solution would eventually be to tear it down.

One important element for Taylor was to make improvements that will recall the industrial heritage of the building, specifically the restoration of the flour elevator that would have been a critical component to the original bakery. Houle and Taylor’s proposal will see the elevator cleaned and painted as a visible reminder of the industrial background of Davidson Bakery; a small historical information plaque will help visitors connect with the heritage of the site.

Renovations to the former restaurant, along with the introduction of a new local business in the same location, Café Whim, is a key element to increasing traffic to the location, and is all part of the vision that prompted Houle and Taylor to apply for funding for the property.

“The only way Smiths Falls can move forward is if entrepreneurs step up,” Taylor stressed, “This is a long-term approach to growing business.”

According to local lore, Davidson Bakery was opened in 1889 by H. A. Davidson, and was at one time considered the largest commercial bakery in Eastern Ontario. Delivering bread six days a week throughout the town of Smiths Falls, Davidson Bakery was a major employer in the region, and would have touched the lives of many people in the community. Few Smiths Falls’ residents would have escaped the mouth-watering scent of fresh-baked bread, and the reminder of its significance to their lives either as employees or as customers.

Through three generations of owners, Davidson Bakery’s goods were delivered as far as 50 miles away from Smiths Falls. Davidson Bakery was also one of the early adopters of the bread baking machine, a cutting-edge technology of the time.

From a heritage perspective, although lacking formal heritage designation under the Planning Act, Davidson Courtyard is a stellar example of the architecture favoured by early settlers in the town. The red brick used on the building would have been found on many commercial and residential structures throughout Smiths Falls, and can still be seen there today.

Interestingly, and despite its prominent downtown location, Davidson Courtyard was excluded from the original boundaries of the Smiths Falls Business Improvement Area, also known as the Downtown Business Association (DBA) upon its formation in 1982. In 2015, upon request by the owners at that time, the boundaries were amended to include Davidson Courtyard and the businesses located there.

Converted in the early 1990s from a commercial bakery to its current mixture of commercial and residential uses, the original bakery building was expanded upon multiple times over the years until it reached its current configuration with a central courtyard flanked on three sides by commercial units. This orientation makes it a perfect location for a café with an outdoor eating area, and as a shopping destination with room to sit and relax outdoors. In 2016, the Smiths Falls’ Farmers’ Market was moved to the courtyard, adding yet another layer of local importance to the location.

Story and Photo Courtesy of the Town of Smiths Falls