Continued growth and innovation on the horizon for Tweed 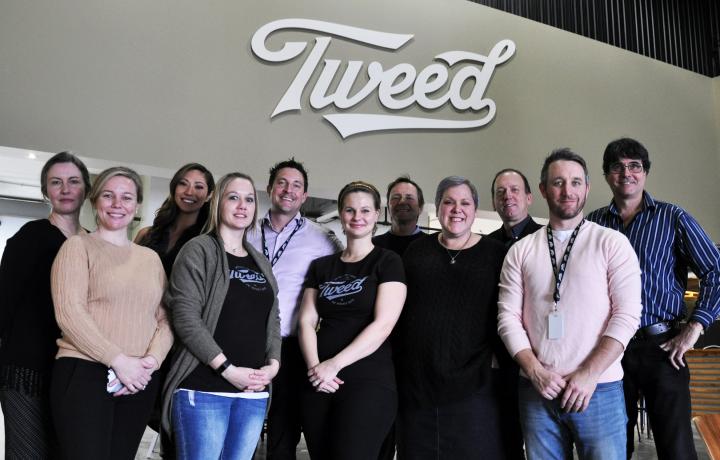 Welcome to Canopy Growth Corporation, where exponential growth has framed the future of what started as a small start-up and has since grown into a multibillion dollar, TSX-listed company. Headquartered in the town of Smiths Falls’ iconic industrial building, the former Hershey Chocolate factory,  Canopy Growth and its first national cannabis brand, Tweed, have  established a cutting-edge business that is shaping the future of the marijuana industry in Canada and around the world.

Canopy Growth’s selection of Smiths Falls as the company’s headquarters was not by accident; Smiths Falls lies along a provincial highway, centrally located to Brockville, Ottawa, Kingston, Perth, Carleton Place and Mississippi Mills. The 472,000 sq. ft., 42-acre former chocolate processing facility and property had ample room for growth both indoors and outdoors. Even better, the previous owners had left behind much of their processing equipment, which Tweed has already put to good use in assisting with their own operation.

Jordan Sinclair, Canopy Growth’s Director of Communications, explained the decision to settle in Smiths Falls was a combination of the availability of a world-class industrial facility in the Hershey Chocolate factory, combined with the welcoming environment found in Smiths Falls’ economic development staff, and  favourable local by-laws that is a perfect fit for a company that lies somewhere between an agricultural company and a manufacturing company.

“The atmosphere here in Smiths Falls convinced us this was where we wanted to be,” Sinclair said, “The former Mayor in particular is a real champion for us, he was, and is a real friend to Tweed.”

As the site of Canopy Growth’s headquarters, Smiths Falls is fortunate to sit at the epicentre of cannabis innovation. The Smiths Falls’ campus is the largest indoor marijuana growing facility in the world, employing more than 200, a number that continues to grow. Sinclair noted the unspoken goal is to fill the void left by the previous tenant.

With new records set every other day for shipping and delivery from its Smiths Falls location, it seems the threshold for growth is virtually limitless.

Since its launch into the medicinal cannabis industry in 2013, the company’s insight into the potential of what at the time was a controversial industry has paid off in more ways than one. Only three years later, it has expanded cannabis production to incorporate a growing number of world-class marijuana cultivation and processing facilities, with exports and partners around the world.

Tweed currently operates 12 growing rooms, all carefully managed for temperature and humidity and complete with musical accompaniment to encourage growth, providing the optimal growing environment for cannabis. In addition, 12 new growing rooms will use an innovative multi-level growing space to allow for maximum square footage for plant growth, another innovation incorporated by Tweed.

The research and development facility has been at the centre of much of the innovation currently emerging in the cannabis industry. Oil extraction, an in-house quality assurance lab and the industry’s only seed breeding area are all important additions to Tweed’s Smiths Falls campus.

With a focus on cannabis quality, Tweed has been working in an evolving industry, and forging their own path through the science and technology.  Because the cannabis industry is evolving so quickly, Tweed is rebuilding the wheel with each step forward, while navigating extensive regulations and multiple regulatory bodies. Their secret to success? Plain, old-fashioned trial and error.

“It’s a lot of research, and a lot of science,” Sinclair said, “You can’t be afraid to try new things and see what works and what doesn’t.”

Despite the cultural controversy surrounding cannabis, the mood appears to be shifting towards the progressive, Sinclair noted. “There was a lot of stigma associated with cannabis, when we started only a small number of doctors were prescribing cannabis, now it’s almost 10 per cent.”

This forward-moving trend seems destined to continue; beyond the proactive shift in medicinal cannabis regulations, the federal government is moving to legalize, restrict and regulate cannabis for recreational use, a move that will directly benefit the Canadian cannabis industry.  Tweed President, Mark Zekulin, called the impact of legalization for Canopy Growth “massive.”

As the industry evolves, new horizons are breached and new innovations discovered to maintain Canopy Growth’s position as an industry leader. Every step forward equates to a corresponding step forward for Smiths Falls, steps that could turn into giant leaps in years to come.

“We want Smiths Falls to be the centre of the most celebrated cannabis company in the world,” Zekulin said, “We have an incredible runway ahead of us, but the potential is all there.”