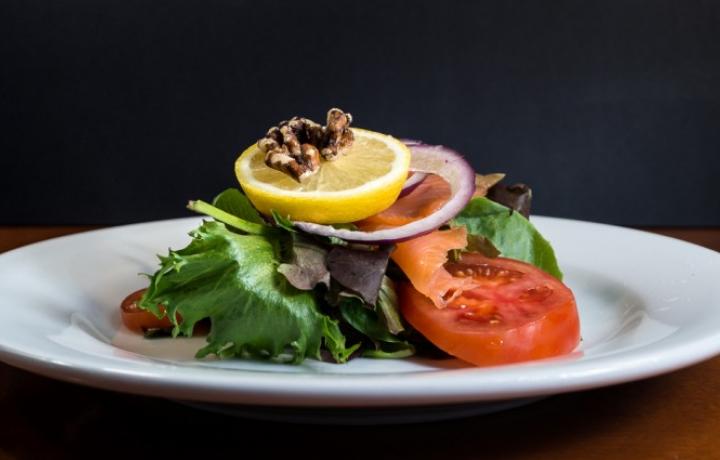 A visit to Chuckles Jack is an exploration of the senses – centrally located in downtown Smiths Falls, Chuckles Jack entices diners with delectable culinary creations focused on authentic Indian and Canadian cuisine, all served in a spacious and tastefully decorated interior complete with top of the line fixtures and stylish décor.

Looking around Chuckles Jack’s well-furnished interior, it’s hard to believe this community centrepiece spent months with its doors closed to the public, struggling through a difficult and challenging move and renovation. It was Chuckles Jack co-owner and chef, Ram Mogandas,’ passion for food and commitment to offering his guests a one-of-a-kind dining experience that prompted the restaurant’s move from its former Centre Street location, to the new Russell Street building, formerly Manhattan Bar & Grill.

Mogandas’ vision for the Russell Street location was to create a fine dining destination for the community, and a gathering place for locals and visitors alike. Undeterred by the extensive renovations needed to restore the building, Mogandas began construction in 2015, with a plan to completely renovate the building and not only update all services and interior finishing, but also create additional seating, a conference room, separate bar, and patio area.

“We took a risk…it’s a big project, and we had to trust the community would support us,” Mogandas explained.

That support was delivered ten-fold – when construction slowed at the site due to unforeseen complications with the renovations, the municipality stepped up to the plate to keep the development on track. According to Mogandas, one of the factors contributing to the restaurant’s eventual re-opening was thanks to Smiths Falls’ Community Improvement Plan (CIP).

In Ontario, the designation of a CIP area allows a municipality to provide financial incentive for investments into improvements and maintenance to businesses located within the CIP zone.  The goal of a CIP is to promote economic sustainability and quality of life in the community, and assist the downtown core in continuing to be a destination for residents and visitors by leveraging private investment.

In 2013, Smiths Falls officially approved a CIP document, with a designated area focused primarily within the downtown core. Chuckles Jack’s application was the first processed through the CIP program, and set an example for other businesses, serving as a model for others to take advantage of the community-focused opportunity.

“Chuckles Jack has set a shining example for other business owners in the community for a successful CIP project,” Cyril Cooper, Manager of Economic Development said, “We were pleased to be able to support this small business through their recent expansion, and offer whatever services we could to ensure the process ran smoothly.”

According to Mogandas, the renovations to the Russell St. building were extensive, calling for completely new wiring, plumbing, and replacement of doors, and interior upgrades. Mogandas received $25,000 in funding through the CIP program, $20,000 of which was intended to offset renovation costs, and $5,000 to reduce municipal fees for building permits.

“It was a big help for the project,” Mogandas said, adding that while the financial support provided much needed funding for the renovations, receiving the CIP was also an indicator of the town’s overall support for Chuckles Jack. “It really demonstrated the faith they had in my business.”

Today, diners at Chuckles Jack will find the new Russell Street location completely transformed from its previous incarnation. Renovations have included frosted glass doors, a fireplace insert and lounge area, conference room and separate bar, along with classy interior finishes featuring high-end lighting and seating. A dance floor that doubles as a seating area holds centre court in the middle of the restaurant, which has an overall seating capacity of up to 220 diners.

The separate bar, aptly named “The Ale House” is a bright and spacious interior featuring a fully stocked bar, and wide screen TV in a stylish setting. The highlight of the location is an open-concept kitchen that offers diners a birds-eye view of the culinary process, while Mogandas whips up one of his culinary masterpieces.

A grand opening ceremony in June 2016 was met with support from not only the community but also the municipality; Mayor Shawn Pankow attended the opening ceremony, along with several councillors, the Town Planner and other staff who were all invested in the process.

From Mogandas’ perspective, the CIP allowed him the freedom to pursue the renovations from a much stronger financial footing, and the chance to make his vision a reality.

“This is not just for us, it’s for the whole community,” Mogandas said, “We’re happy to be here to serve them.”