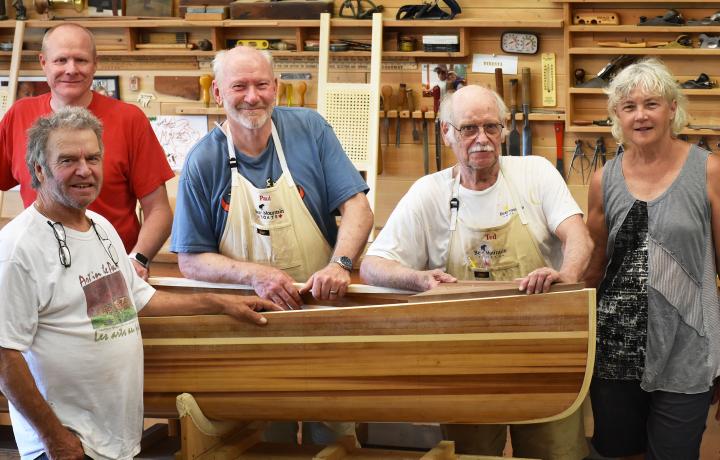 WESTPORT - Canoe making enthusiasts from all over the world found their way to Bear Mountain Boats recently to learn from owner and master boat builder Ted Moores.

Ted is called "the guru of canoe building," with his sprint racing canoes and books on wood strip canoes cherished around the globe. People are so keen about working with Ted and his partner Joan Barrett that the workshop sold out in 20 minutes once posted online.

"This course is worth every penny because he's the best in the world," says Germany's Werner Schmidt, who spent a week in Ted and Joan's workshop just north of Westport on County Road 10.

Ted and Joan moved to the area a few years ago and brought their business with them from Peterborough. They have been building boats for over 40 years and have an online business with wooden canoe, kayak and small boat kits and plans, hard-to-find building materials, books and videos.

"We measure our success in the thousands of Bear Mountain canoes and kayaks that emerge from home workshops around the world each year," says Ted.

He is legendary for his wood strip boats. Over the years, Ted and Joan have been building wooden boats that combine classic lines with the most advanced marine technologies. Bear Mountain Boats is renowned for its C4 and C15 sprint racing canoes, prototypes for production designs, elegant one-off custom boats as well as repairs and restorations of historically significant craft.

"I had a job once and I don't recommend it," jokes Ted, noting he has been doing what he loves since the 1970s. He sold his first business in Gravenhurst after just a few years. But soon the couple started Bear Mountain Boats when living in that location. The business continued to grow while living in Bancroft, Peterborough and now Westport. The recent move was to be nearer to their children and grandchildren.

Ted has passed on the skills he has acquired into his popular books Canoecraft andKayakcraft. He co-wrote Kayaks You Can Buildwith Greg Rossel. There is also a DVD Fine Wood-Strip Canoe Building starring actor and friend Nick Offerman. Nick also appears in videos on Ted and Joan's YouTube channel.

Joan and Ted are people who like to share their knowledge and workshop experience. That's why they are a part of the upcoming event Makers Rendezvous with Canadian Canoes in Westport on Saturday, September 14.

"We're looking for people who make things - craftspeople of all stripes - from canoe builders to crafters to creating your own YouTube channel," says Joan of the event. There will be workshops and drop-in displays.