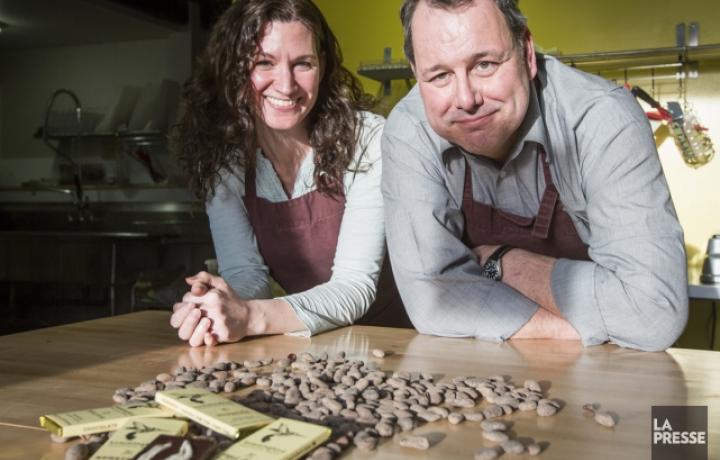 The Gilmours never set out in their inaugural entrepreneurial endeavour for praise, accolades and renown. They simply wanted to make amazing chocolate, in hopes that other folks would enjoy it too.

But through tremendous hard work, exceptional skill and dedication, over the past five years Erica and Drew Gilmour have turned their plucky little company – Hummingbird Chocolate Maker – into the talk of the confectionary world, earning a prestigious 2016 Golden Bean Award and other distinctions at the recent London Academy of Chocolate Awards.

The ensuing storm of positive media coverage and publicity has ramped up the company’s already ambitious expansion plans, and has focused many more eyes on the already picturesque and inviting community of Almonte, near Ottawa, where Hummingbird has its home.

“We have brought on a number of new staff. Some of them will be temporary but there will be others who will stay longer, depending on the demand. We think over the next six months we will be a six or seven person operation,” said Erica Gilmour.

“We were already in a pretty serious growth curve which we were going to start implementing in the fall. Those plans have kind of been thrown out of the window and we have to really expedite things at this point because of all the positive things that have happened.”

The story arc for the Gilmours and Hummingbird is very much that of many of the host of craft microbreweries and artisan cheese manufacturers that have been developed in recent years. What was first a passion became a hobby, and that hobby turned into a commercial enterprise that is now providing a living.

Erica and Drew met while working in international development programs in the Middle East, particularly Afghanistan. While there, Erica said she developed knowledge of and respect for the various small scale farmers in the area and focussed her efforts on helping them bring their products to market on a more international scale.

“I just loved that kind of work because you get to go and visit people and what we found through that work was that creating a sustainable market for farmers is really the best way to have a lasting impact on their livelihoods,” she said, adding that after the couple married and started a family, Erica stayed home while for a few years Drew remained in the field. It was on a trip to earthquake-ravaged Haiti in 2009 that Drew became interested in cacao farmers and their product.

“And about the same time I had read an article in a business magazine about this new trend of ‘bean to bar’ chocolate. And that intrigued him because I ate so much chocolate. He thought ‘Erica loves eating chocolate, maybe she would love making chocolate.’ So he convinced me to try this. We bought a few pieces of equipment and set them up in our basement and I was completely hooked after the first batch. It was just such a fun, interesting thing to do,” she said.

Friends and family soon wanted to actually buy the chocolate as gifts, which convinced the Gilmours that there may be a market for people looking for a truly exceptional, well-crafted chocolate, created from a philosophy based on quality, traditional, natural methods and ingredients, sustainability and something that was also hyper-local – again, very much along the craft beer model.

“We started selling it at the farmers markets here in Ottawa [where the Gilmours live] and things grew gradually because we had no idea how much it would take off. Our first production space was in the basement of Alice’s Village Café in Carp. We were there for about a year and then moved into a larger space that was about 750 square feet and about a year and a half ago we moved into our current space in Almonte which is about 2000 square feet.”

The Gilmours learned about chocolate making from various online sources, but what has seemingly set their product apart is Erica’s uncanny taste buds – she just knows what good chocolate should taste like.

“Many chocolate makers have the same equipment that we do and have the same beans and they might make really excellent chocolate, but it doesn’t taste the same as ours. I believe the person making it has a definite impact on the quality and the outcome. Number one, we try to use the very best cacao beans and then I think for us the secret is taking the time to do it slowly, to try to tease out the flavours in those beans,” she explained.

Hummingbird does have a small retail outlet at 9 Houston Drive in Almonte, but much of their product is sold wholesale to independent high-end food shops, as well as to a number of Farm Boy outlets. Erica said the company is working to get its products into the Greater Toronto Area. The biggest challenge early on was to convince people that the product was worth the price.

“We are really creating a new category or industry, and that takes time. There were only two or three chocolate makers in Canada when we started and now there are about 25. So it’s definitely a growing trend and I think we’re on the leading edge of that. It’s always challenging to explain to customers why they should spend $6.50 or $7 on a chocolate bar, and also to convince retailers that this is something that will actually sell. It’s been a huge challenge to describe how we’re different and to establish our value proposition,” Erica said.

But it’s working, and getting full-on press coverage from media outlets throughout the Ottawa region has helped bring loads of attention to Hummingbird and their eight to 10 (depending on the season) varieties of high-end chocolate bars.

And while the Gilmours don’t currently reside in Almonte, they are hoping to move into the community soon.

“There entire community is so friendly and supportive and there is also a real co-operative business environment here. Everyone looks out for one another and does what they can to support one another. We have actually been too busy, especially lately, to try and sell our house and buy a new one here, but it’s a goal of ours to live in Almonte someday,” she said.