Free trade agreements (FTAs) provide great opportunities for exporters, as they enable those companies’ products to enter these markets mostly free of tariffs (or customs duties), giving them a competitive advantage. Likewise, importers, distributors and manufacturers benefit, since they can import raw materials, components, parts and finished products mainly with zero customs duties. These agreements also provide other advantages for the trade in services, investment, business travel and so on, but in this article we will focus on the trading of goods.

Canada’s main FTA, the North American Free Trade Agreement (NAFTA), linking us with the US and Mexico, has been in effect since January 1, 1994. It would be hard to find a businessperson who is unaware of NAFTA and there are two reasons for this. First, because year after year, the US market represents 75 per cent of our exports and about 60 per cent of imports, illustrating the importance of this special relationship for Canada and how our economies are, to a certain extent, integrated. The second reason everyone in Canada knows about it is that the current US administration has embarked on a renegotiation process, also called modernization, of the agreement. This exercise has been highly publicized, often via social media, sometimes using undiplomatic language like “worst deal ever” and so on.

In addition to NAFTA, Canada enjoys FTA’s with a number of countries, namely Chile, Columbia, Costa Rica, the European Free Trade Association (Iceland, Liechtenstein, Norway and Switzerland), Honduras, Israel, Jordan, Korea, Peru and Ukraine, some of which have been in effect for some time—such as with Israel since 1997—and many of which mirror agreements the US has too. In addition, we enjoy two relatively new FTA’s, linking us to two markets that are even larger than the US, namely CETA and the CPTPP. CETA stands for the Comprehensive Economic and Trade Agreement, the FTA signed with the European Union and its 28 member countries, and provisionally in effect since September 21, 2017. CPTPP stands for the Comprehensive and Progressive Agreement for Trans-Pacific Partnership, linking us with 10 other Pacific countries, the most significant one, in economic terms, being Japan, the world’s third-largest economy. The TPP has been partially in effect since December 30, 2018. 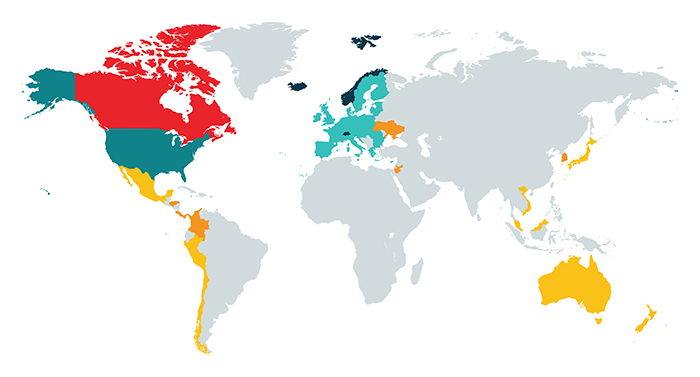